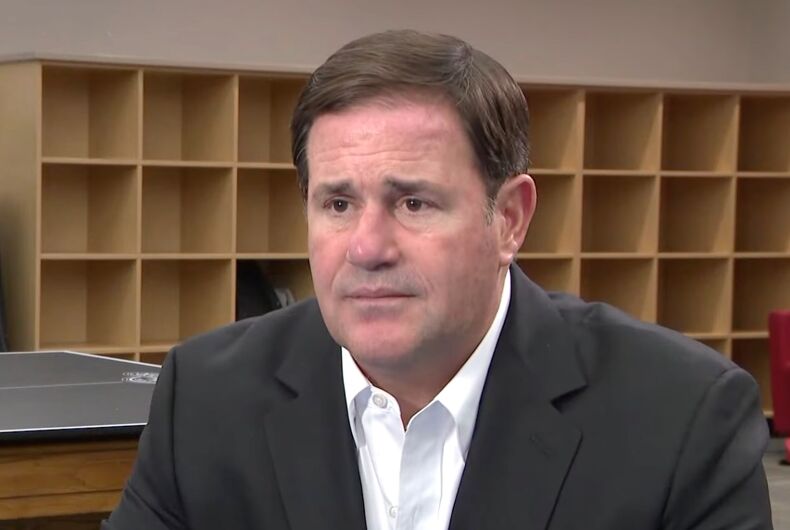 Arizona Gov. Doug Ducey (R) signed two bills into law yesterday that target the transgender community. In a statement released by his office, Ducey admitted the laws were “narrowly-targeted” to persecute trans youth.

The two laws both target transgender girls. One law bans them from playing school sports from K through college. The other bans gender affirmation surgery on minors, a procedure that doctors don’t actually recommend for anyone under 18.

SB 1138, the ban on surgery, formerly included puberty blockers for youth or hormone treatment for teenagers. After the bill couldn’t get enough support among Republicans, the medication bans were removed.

SB1165 bans transgender girls and women from playing school sports from Kindergarten through college. It applies to all public schools and any private schools that play against public schools.

“Today I signed S.B. 1138 and S.B. 1165, legislation to protect participation and fairness for female athletes, and to ensure that individuals undergoing irreversible gender reassignment surgery are of adult age,” Ducey said in a statement. “This legislation is common-sense and narrowly-targeted to address these two specific issues ⁠— while ensuring that transgender individuals continue to receive the same dignity, respect and kindness as every individual in our society.”

“For months, hundreds of doctors, parents, advocates, and trans youth have shown up in opposition to the countless anti-trans bills heard in committees,” said Jennifer Allen Arroz, the executive director of the ACLU of Arizona. “Despite the overwhelming pleas to end these discriminatory bills, legislators were intent on using trans youth as political ploys and have now passed a bill that prohibits trans youth from receiving the life-saving medical care they require.”

The bills signed into law were only two of 15 anti-LGBTQ bills Arizona lawmakers put forth in 2022.

“First and foremost — to trans kids in Arizona: know that you are loved and you are not alone,” K.M Bell, ACLU of Arizona campaign strategist, added. “Governor Ducey’s decision to sign this harmful and discriminatory piece of legislation into law is nothing more than a political ploy to score points with extremist lawmakers and hateful groups peddling falsehoods and manufactured outrage.”