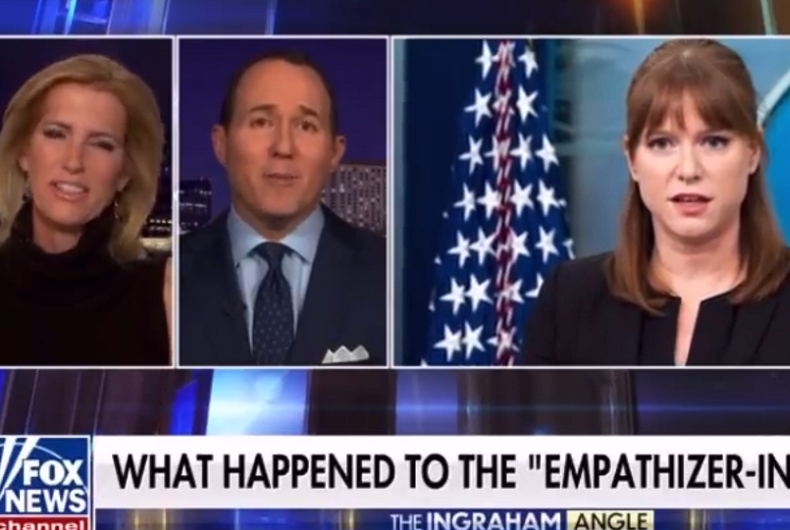 A guest on The Ingraham Angle brought up the Smiths' campaign contributions to Joe Biden.Photo: Screenshot

White House Director of Communications Kate Bedingfield is getting attacked by Fox News reporters who are angry that she didn’t take a firm stance against Will Smith after he slapped comedian Chris Rock at the Oscars this past weekend.

Bedingfield led the White House press briefing this past Tuesday and a journalist asked her about the slap.

“I want to talk about Will Smith and Chris Rock,” he said. “You know, it’s the biggest story right now. You saw the level of violence that was on- was unleashed on Chris Rock. Is that something that the White House condones, the type- that type of violence? Do you condemn it? And do you do anything to support comedians who have been attacked and other artists?”

Bedingfield made it clear that while a lot of people are talking about the slap, it’s not something that the Biden administration is going to do anything about.

Bedingfield is asked about Chris Rock and if the White House is doing anything to support comedians being attacked… pic.twitter.com/I4CJEA9ERR

That should have been the end of it, but Fox News decided that his lack of an opinion on the Oscars proved just how terrible President Joe Biden is.

“Ellen has more common sense and understanding of the gravity of this moment, Laura, than even the White House,” a guest on Fox’s The Ingraham Angle said, referring to Wanda Sykes’s and Ellen DeGeneres’s discussion of the slap on Ellen’s show yesterday, “where the comms director today refused to condemn Smith’s violence.”

They couldn’t just leave it at that, though. The Fox guest went on to imply that the Smiths effectively bought Biden’s silence on a non-policy issue that it’s not at all surprising the White House wasn’t going to comment on.

“Maybe that’s because Will Smith and Jada Pinkett Smith gave $5,600 to Biden and hosted a fundraiser for his predecessor, Barack Obama,” he said.

Bedingfield is asked about Chris Rock and if the White House is doing anything to support comedians being attacked… pic.twitter.com/I4CJEA9ERR

Fox guest complains that The White House didn’t condemn Will Smith when asked about it in the press briefing and suggests it has something to do with Will Smith donating to Biden pic.twitter.com/hl8rCuQqwp

At the Oscars this past Sunday, Rock was presenting the award for Best Documentary (Feature) and he made a joke comparing actor Jada Pinkett Smith, who is married to Will Smith, to actor Demi Moore in G.I. Jane, where Moore shaved her head.