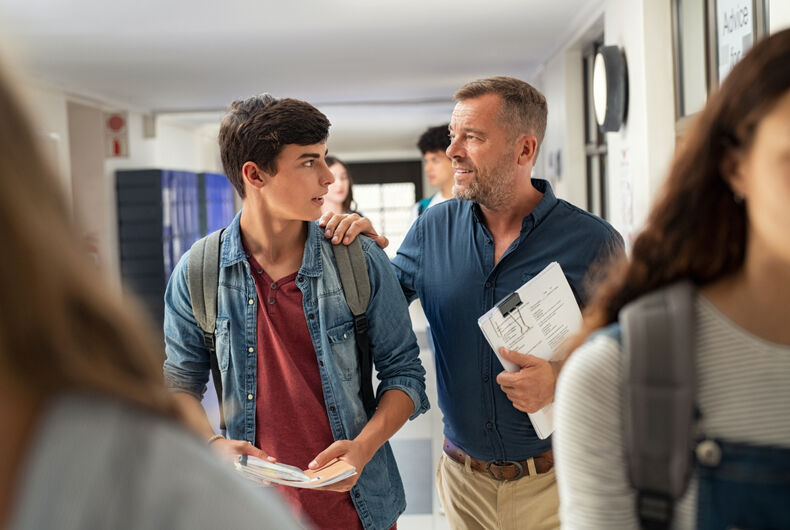 An Arizona House panel has voted in favor of a bill that would punish teachers who don’t out students to their parents.

H.B. 2161 would not only revoke certifications from teachers who withhold information about a student’s health and “purported gender identity,” but it would also allow parents to sue school districts if they discover that information about their child was kept from them.

Related: Texas Gov campaigns on “Bill of Rights” that could ban LGBTQ content from schools

It will now move on to the full House for a vote.

The bill, which also broadly states that government employees must disclose any information “relevant to the physical, emotional or mental health of the parent’s child” is sponsored by state Rep. Steve Kaiser (R).

Kaiser claims the bill is mainly about surveys teachers give to students without their parents’ knowledge that can reveal a variety of personal details.

Many are concerned, however, that the requirements compromise the safety of LGBTQ students, as they are at an increased risk of being kicked out of their home if their parents find out about their sexual orientation or gender identity.

Russell Toomey, associate professor of family students and human development at the University of Arizona, told the Arizona Daily Star that transgender youth also face an increased risk of suicide when their parents find out about their identity.

While the bill passed the House panel 6-4, there were even some Republicans who were concerned that it would lead to unnecessary retaliation against teachers as well as prevent students from feeling comfortable confiding in adults at school.

Nevertheless, the panel Republicans voted in favor of the bill, though state Rep. Joel John (R) said he may vote no on the House floor if there aren’t changes made regarding the outing of students.

State Rep. Michelle Udall (R), who is also a high school math teacher, voiced some concerns that the bill would eliminate her ability to give her students time to open up to their parents on their own. Ultimately, though, she decided to vote in its favor, saying it is “the parent’s responsibility” to figure out how to be supportive.

State Rep. Daniel Hernandez (D) pointed out, however, that after the Internet, school is the place where LGBTQ youth find the most affirmation. This bill could take school away as that place of refuge.

“Only one third of LGBTQ youths found that their homes were LBGTQ-affirming,” he said, citing a survey.

H.B. 2161 is also not the only anti-LGBTQ bill that has been proposed in Arizona this year.

Arizona state Republican Sen. Wendy Rogers has proposed Senate Bill 1045 to prohibit medical procedures that affirm the gender identity of children and teens who are transgender. This bill would also force teachers and schools to out trans and gender non-conforming students to their parents.