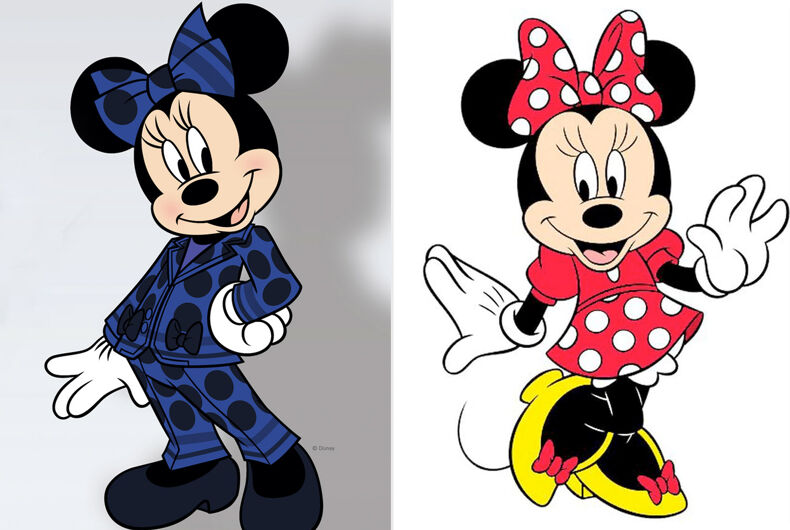 Minnie Mouse will don a designer pantsuit for Disneyland Paris’ 30th anniversary celebration and conservatives are frothing over “woke politics” and polka dots.

Stella McCartney has given the classic cartoon character a chic twist that takes her out of her traditional red and white and puts her in daring colors… blue and black.

“What I love about Minnie is the fact that she embodies happiness, self-expression, authenticity and that she inspires people of all ages around the world. Plus, she has such great style!” McCartney said in a statement. “I wanted Minnie to wear her very first pantsuit at Disneyland Paris, so I have designed one of my iconic costumes – a blue tuxedo – using responsibly sourced fabrics.”

“This new take on her signature polka dots makes Minnie Mouse a symbol of progress for a new generation. She will wear it in honor of Women’s History Month, in March 2022. I can’t wait for you to see this new look at Walt Disney Studios Park!”

But talk of pantsuits and women’s history has conservatives wary despite the updates to most characters’ wardrobes. After all, according to Tucker Carlson, liberals just forced Green M&M to swap out her high heels for sneakers so she’d be “less sexy.”

And Fox wasn’t about to miss this anthropomorphic train either. Host Jesse Watters made sure to ask professional Twitter troll Candace Owens her opinion on the pretend mouse’s sartorial choices.

“They’re trying to destroy fabrics of our society,” Owens gasped, saying the changes to a cartoon character at a French amusement park are meant to distract Americans from the inflation rate. “Never mind, that you can’t get anything at the grocery store and you can’t buy a piece of bacon unless you’ve got $30 in your pocket.”

“How sad that the world has come to this….” someone on Twitter replied to the Disney Paris tweet about the costume.

“…these political statements and the obsessions with gender and sexuality and becoming more more the opposite sex than your own is madness,” another polka dot partisan added. “This was done not for the heck of it but to be liberating and progressive and force the typical agenda we have been seeing.”

“Mfer mad that a mouse can wear pants now?” someone responded to them with the death emoji.

“More woke bs,” XanderArt whined. “The design’s nice, but we’re talking about a character that is almost 100 years old. The og look is timeless, and the whole point of it was to differentiate her from Mickey(especially back in the 20s). Minnie in a suit makes her look like Mickey in a suit.”

“Imagine being so broken in the head that you get upset about Minnie Mouse wearing pants,” Ashelli Jo tweeted, summing up the controversy succinctly.

You might even say say they put a (polka dot) bow on it.

“They’re trying to destroy fabrics of our society” pic.twitter.com/UlytdGMZYA

How sad that the world has come to this….

Mfer mad that a mouse can wear pants now!?!?!

GOP lawmakers want to force teachers to out their students