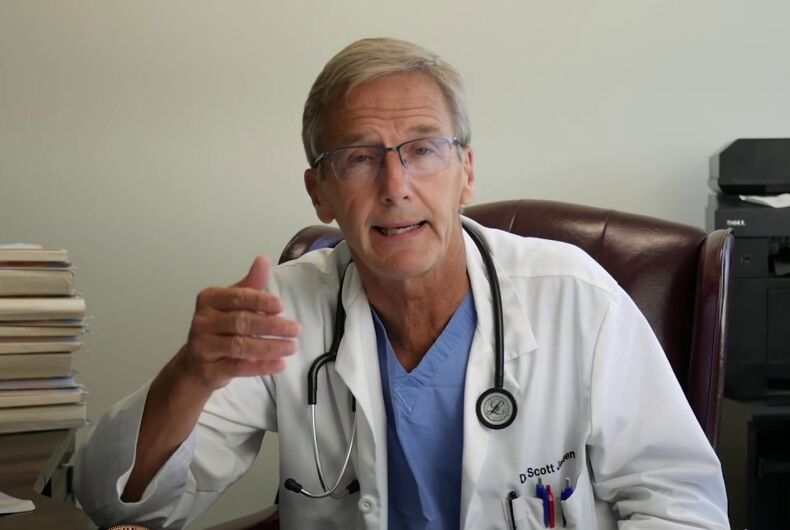 Scott Jensen, the Republican candidate for Minnesota governor, recently joined the growing list of conservatives who think that public schools are allowing students to pee inside of litter boxes, like cats.

“Why are we telling elementary kids that they get to choose their gender?” the 67-year-old asked last week at an event in the city of Hutchinson. “Why do we have litter boxes in some of the school districts so kids can pee in them because they identify as ‘a furry’? We’ve lost our minds.”

Various conservatives have repeated lies about schools recognizing furries as a gender identity, but fact-checkers and school districts have repeatedly disavowed such stories as hoaxes. In reality, such stories are meant to bias people against transgender individuals and against transgender-inclusive school policies, since they mock the idea of living as one’s authentic self.

Jensen, a doctor and former state lawmaker, has a lesbian daughter and he supported a ban on gay conversion therapy at one point, a bill that he later tried to water down.

Nevertheless, his comment about “telling elementary kids that they get to choose their gender” echoes rightwing claims that LGBTQ people and allies are indoctrinating children into thinking they are trans. But actual trans children self-identify as their gender consistently, insistently, and persistently throughout their youth regardless of adult input, just like cisgender children.

Jensen has yet to retract his comments. He is expected to lose his race against the incumbent Gov. Tim Walz (D).

At an event last week, the GOP candidate for governor of Minnesota there are, "litter boxes in some of the school districts so kids can pee in them, because they identify as a furry…"

An early example of the stories about students identifying as house pets and demanding litter boxes was Michigan activist Lisa Hansen. Because Hansen opposed federal regulations allowing trans students to use school restrooms matching their gender identities, she claimed that students who identify as cats were allowed to use litter boxes in one school’s unisex restroom.

A Michigan school superintendent was forced to write an email to parents debunking such a lie. An Oregon public school district superintendent was also forced to send a similar email after one social media user claimed that furries were wearing leashes and being petted by other students at local schools.

Nevertheless, the lie has been repeated by right-wingers, including by Nebraska Sen. Bruce Bostelman (R).

Similarly, Christian hate pastor Aaron Thompson and anti-LGBTQ televangelist Andrew Wommack both said that schools allow students to identify as animals and demand litter boxes in classrooms. Michigan Republican Party Co-Chair Meshawn Maddock also repeated the lie, as did Heidi Ganahl, the Republican candidate for governor of Colorado. She claimed that student “furries” are identifying as cats in over 30 different schools in the state.

Rep. Lauren Boebert (R-CO) has claimed that a father in Michigan told her that his son got into trouble when he stepped on the tail of a student who identified as a furry.

Reuters published a fact check in July that said there is “no evidence of them disrupting classrooms or schools developing a policy of including them as a formal identity.”