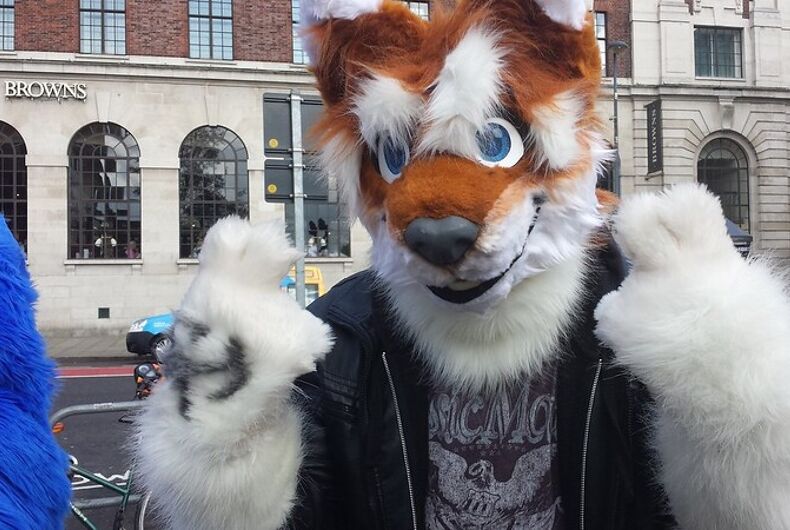 Furry in Leeds in 2014Photo: Julian Hodgson via Flickr

Chaya Raichik, the woman behind the wildly influential and anti-LGBTQ “Libs of TikTok” Twitter account, is working her followers into a rage because, she claims, a Texas school is making kids design their own “fursona.”

“A second grade teacher in Austin ISD allegedly gave students worksheets on furries,” she wrote with pictures of furry worksheets. “These included a furry wordsearch and an activity on designing your own furry persona.”

The pictures included came from Facebook. One of them asks, “What would your fursona be like?” and asks if they’re male, female or non-binary and if they have fur, scales, or feathers.

Another sheet Raichik included announces a “Culture Month,” complete with a week devoted to goths, furries, and other “youth subcultures.”

Raichik also shared a screenshot of someone saying that they are a concerned parent in the Austin school district who is “frankly disgusted” that their second grade daughter is being taught how to be a furry.

But the whole thing is a hoax.

Mashable contacted the Austin ISD and a spokesperson said that the worksheets were never used in the district.

“Our curriculum team looked at our resources, and it is not in our curriculum nor is it part of counseling or social emotional learning,” the spokesperson said, adding that the districted has been “inundated” with messages since Raichik tweeted about the district.

The worksheets were actually created by a user of a website for internet trolls called rDrama to fool people (the hoax wordsearch even has “RDRAMA” in it). The person who created them was complaining in April that users of  the social media platform Reddit weren’t falling for their hoax.

But Raichik – and many of her gullible followers – fell for it.

Raichik became one of the most influential conservative activists this past year as she posted videos of LGBTQ people – often teachers – and called them “groomers.” Raichik is arguably the individual most responsible for the current groomer panic, referring to many perfectly normal interactions involving LGBTQ people as pedophilia.

Her Twitter account has gotten her interviewed on Fox News and Florida Gov. Ron DeSantis’s (R) office cited her work as influential on the state’s Don’t Say Gay law.

Part of the current moral panic is the rumor that schools are catering to student-furries, and several rightwing politicians have fallen victim to it.

Nebraska Sen. Bruce Bostelman (R) said last month that “schoolchildren dress up as animals, cats or dogs, during the school day. They meow and they bark, and they interact with their school, with the teachers in this fashion.”

“I even heard from one person here recently, he said that a student identified as a cat and wanted a litter box, and the school didn’t provide the litter box so the student went ahead and defecated on the floor,” he said. “Really. Really! School administrators, what is going on?”

The story was, of course, fake.

Earlier this month, a rightwing talkshow in Wisconsin read an email on air that was supposedly from a person with grandchildren in a school that was being taken over by furries.

“The Furrys are allowed to dress in their choice of furry costumes,” the email said. “The Furries can choose whether they want to speak in class or not…. The Furries can choose not to run in gym class but instead sit at the feet of their teacher and lick their paws. Barking, hissing and similar animal noises are commonplace in the hallways at the schools…. I am appalled!!!”

In January, a Michigan superintendent was forced to write a message to parents saying that his district does not, in fact, have litter boxes in school for student-furries to use.

“It is unconscionable that this afternoon I am sending this communication,” Superintendent Michael E. Sharrow wrote in an email to parents. “However, our Midland PS stakeholders may be confused about a false message/accusation that has resurfaced this week and is gaining traction in the social media realm.”