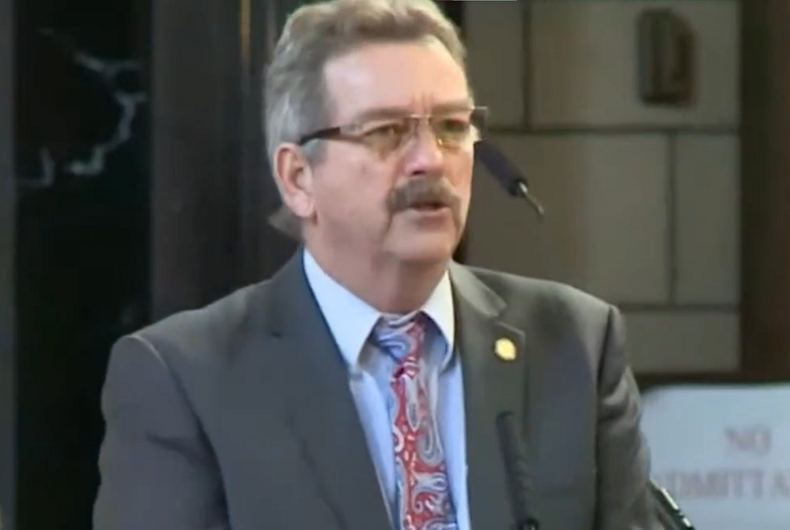 A Republican lawmaker gave a speech about a wild online rumor that schools are providing litter boxes for students who identify as furries, going so far as to say that a student acting like a cat defecated on the floor when their school refused to give them a litter box.

The Nebraska senator has since acknowledged that he was spreading false information.

Related: Milo signed up for a furry convention, but furries aren’t having it

“Something that kind of took me aback a little bit, and I’m a little shocked, I guess, is how I would put it,” Nebraska Sen. Bruce Bostelman (R) said during a televised debate. “It’s about something called furries.”

Bostelman was discussing a bill intended to help students with behavioral problems when he got stuck in a tangent about furries.

“If you don’t know what furries are, it’s where schoolchildren dress up as animals, cats or dogs, during the school day. They meow and they bark, and they interact with their school, with the teachers in this fashion,” he said.

“And now schools are wanting to put litter boxes in the schools for these children to use. How is this sanitary?” Bostelman asked incredulously.

“How can schools allow this to happen? I think it’s very disruptive in the school system.”

Then Bostelman discussed a specific incident in which a student-furry went too far, although he did not say where he heard this story.

“I even heard from one person here recently, he said that a student identified as a cat and wanted a litter box, and the school didn’t provide the litter box so the student went ahead and defecated on the floor,” he said. “Really. Really! School administrators, what is going on?”

He went on to say that students who wear American flags on their shirts are getting kicked out of schools. He may have been referring to an incident in another state from over a decade ago that had to do with a possible Cinco de Mayo protest.

Nebraska State Sen. Bostelman (R) falsely says that school children are being encouraged to identify as cats: "If you don't know what furries are, it's when kids dress up as cats or dogs, during the school day… Schools are wanting to put litter boxes in… for kids to use." pic.twitter.com/MeQ9wiMVRw

The right has been spreading misinformation online about what goes on in public schools for the past several years. Generally underpinning the misinformation is the idea that schools are presenting overly sexual information to students – often just by making books about baby penguins with two dads available in libraries – which has led to conservative elected officials suggesting literal public book-burnings, rightwing parents protesting transgender students being treated equally in schools, and even the state of Florida banning discussions of LGBTQ people in schools.

The specific rumor about furries was first noted on this website in January 2022 when a Michigan superintendent was forced to write a message to parents saying that his district does not, in fact, have litter boxes in school for student-furries to use.

“It is unconscionable that this afternoon I am sending this communication,” Superintendent Michael E. Sharrow wrote in an email to parents in January. “However, our Midland PS stakeholders may be confused about a false message/accusation that has resurfaced this week and is gaining traction in the social media realm.”

But gullible people online have kept the rumor alive enough for Bostelman, an elected official, to bring it up in a political debate.

He later backtracked and said that the story of the student defecating in class wasn’t true.

“It was just something I felt that if this really was happening, we needed to address it and address it quickly,” he said.

Now that we have Marjorie Taylor Greene’s hot take on Will Smith’s slap we can call it. We’re done.