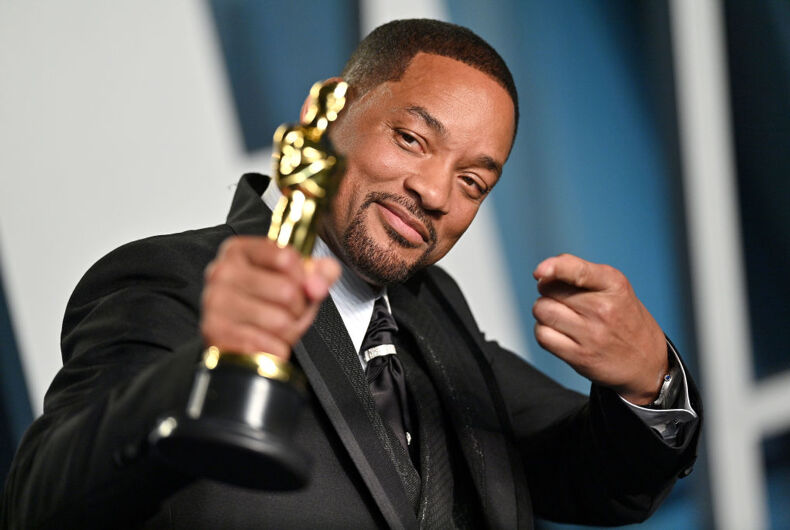 America was on the edge of its seat waiting breathlessly for Rep. Marjorie Taylor Greene (R-GA) to give her hot take about the weekend’s big controversy: actor Will Smith smacking comedian Chris Rock at the Oscars. And she didn’t disappoint.

After admitting that she didn’t watch the show, in two tweets she managed a trifecta. She trolled her husband, insulted herself, and managed to promote violence all at the same time.

Related: Meet the gay Ukrainian men willing to go to war for their country

“I never watch the Oscars but I’ve seen the Will Smith/Chris Rock clip a million times this morning,” Greene tweeted. “I have to say I appreciate the Alpha male response of a husband defending his wife.”

“It was settled and then no more drama. Chris Rock handled it like a man with no whining.”

The QAnon congresswoman notorious for trolling social media continued, “It was much better than a Twitter fight with people saying tough things on their keyboard behind their screen. They handled the issue and then they actually carried on.”

Greene’s background belies her assertions about “alpha males,” a ridiculous sexist self-help theory that posits that the strongest male leads a wolf pack and human males should act like dominant wolves. In reality, most wolf packs are a couple and their offspring. The myth springs from a 1947 study of 10 wolves kept in captivity in a small space who were not related.

But Greene has allegedly been unfaithful to her husband, a topic revisited often as part of her reputation as a former fitness instructor. Her husband’s milquetoast response has also become part of the lore, drawing frequent comparisons to Sen. Ted Cruz’s (R-TX) “defense” of his wife’s honor when Donald Trump insulted her publicly.

This isn’t the first time that Greene has advocated for violence as a solution to issues. Last month she said that transgender camp counselors should be “beat…into the ground.” Despite national condemnation, she refused to apologize or backtrack and, instead, doubled down on her position.

Greene lost her committee assignments last year after indicating support for the execution of Democrats.

It was much better than a Twitter fight with people saying tough things on their keyboard behind their screen.

They handled the issue and then they actually carried on.

You cheated on your husband.
Like a bunch of times.
With your QrossFit gym boss and with a self professed tantric sex-guru.
You cheated.
And yet he’s still your husband.
Alpha what now? 🧐

I watch this with glee every time it gets posted. 😂