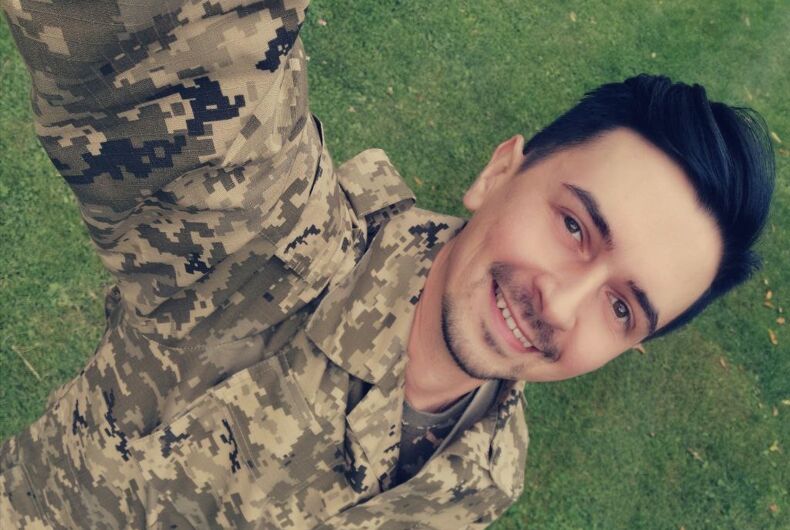 In the weeks following the Russian invasion of Ukraine, the devastation of war has descended upon the country. As is typical in warfare, minorities have borne the brunt of the suffering. Specifically, those identifying as part of the LGBTQ community have faced tremendous hardships, including death, in the face of Vladimir Putin’s campaign of terror.

But a new narrative is emerging around Ukrainian gay men, who have long fought to achieve acceptance in their homeland. Their narrative is becoming one of bravery, patriotism, and a liberated future.

In his social media profiles, Artur, 32, from the Kyiv region, proudly dons his camouflage uniform. He has now worn it, according to him, for “28 days,” since taking on his position in military administration with a focus on logistical coordination of local relief efforts.

Artur is also a drag queen who performs under the stage name AuRa.

Previously married, he and his ex-wife divorced due to each of them, “both missing something in their lives.” Now, although his parents still hope he will marry a second time, he is out of the closet and supported by his friends and those whom he serves, specifically citing his colleagues’ “calm attitude” towards him as an artist.

When asked why he stepped up and joined the battle against the Russian invaders, he responded, “I love my country. Therefore, I decided that I should make every effort to somehow help.”

“I can’t just sit home and watch how people are killed, houses are destroyed.”

Although living as an openly gay male, he is still adjusting to certain moors that are ingrained in the current culture. Citing moments such as holding hands or kissing on the street, Artur brought up the possibility of condemnation from others, writing that he is, “not used to it yet.”

Kirill, 22, is another out and proud gay man.

Located in the city of Khmelnitsky, he just graduated in January with a master’s degree in international relations. With the military lagging in processing his paperwork, Kirill is continuing to work in his profession of technical interface design.

Kirill described his personal and public life in Ukraine as one of tolerance, love, and acceptance.

“I’m semi-out.” According to Kirill, this means a situation where his parents and friends know about his sexuality, and that others, including relatives and associates, don’t discuss the topic with him. Still, he was, ”pretty sure they can guess.”

In being clear that he had, ”never experience(d) homophobia.” Kirill added his belief that Ukraine is a safe place for gay people. “In (a) populous city you can be free to express yourself, but in the countryside, you probably tone it down and be more discrete.”

Unlike Artur, Kirill doesn’t engage in the nightlife scene, and in passing mentioned that although a non-binary friend works for Kyiv Pride, he has never felt a need to engage with the organization since he’s “never dealing with any problems,” relating to his LGBTQ identity.

Kirill also spoke about news reports stating trans women have been denied the right to leave the nation during wartime.

Kirill, along with several others who were interviewed, confirmed that the law stating men ages 18-60 could not depart Ukrainian soil did in fact apply to trans women, with one caveat. If they had their gender marker change in their passports they were free to go.

The process, while legal, is difficult to navigate, and has caught several women in a horrific bureaucratic nightmare. However, while being forced to stay, those along the gender spectrum are not forced to serve in the military, nor are they being made to detransition.

At 36, Mykhailo is living about 60 miles from Kyiv, in the “countryside,” as he put it, with his partner and family.

When asked how gay men are treated in regard to the armed forces, Mykahlio offered an answer apropos to a modern nation in the midst of a battle for survival, “Nobody cares if you are gay or straight, most important (is) if you have military experience.”

He also felt the sacrifices brought about by the war didn’t differentiate between gay and straight Ukrainians. “Life is changed for all people, no difference whether you are gay or not.”

While also confirming the plight of trans women, Mykhalio made sure to note that every year Ukraine becomes better and better for gays, especially in comparison to the time of the USSR, “Ukraine stepped ahead” in the case of the LGBTQ society, he said.

Having been a student in the city of Poznan, he came back to Ukraine due to a bout with depression. While praising the place of his studies as the “gay capital of Poland,” Eugene pointed out that it is still a bit homophobic “as it is in eastern Europe.”

His experience as a young gay man has been tougher than the others. He was outed by his sister at a young age, and his mother wants to imagine he will one day break up with his boyfriend to marry a woman. His father, he says, is “more accepting” than his mom.

In the midst of war, he is seeking out a therapist in hopes of resolving the trauma surrounding his family and sexuality.

Regarding his part in the mobilization efforts by the Ukrainian Army, Eugene, now living in Rivne, has yet to be called to military service. But he will go if asked.

Dima, 33 and also from Kyiv, was not only effusive in his praise of the Ukrainian military, but is prepared to go to the front if conscripted.

“I’m not fit for service,” he wrote, but if there is a third wave of the draft he will be “called up for military service” and take part.

He too delineated between the ease of life in the capital and the more rural areas. “It’s easy in Kyiv…in small towns of course it is harder.” Dima further described the country as “50-50,” on acceptance of gays and gay rights.

The glowing pride each of these men displayed in their nation and in themselves shows that the label of sexuality is but one part of what makes each of them patriots and heroes of modern Ukraine.