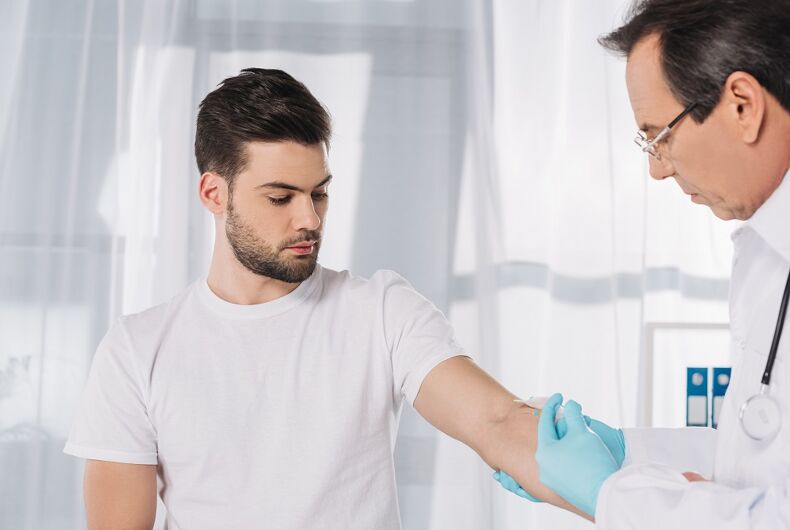 Gay and bisexual men will soon be able to donate blood in Canada without first being required to remain celibate for three months. The U.S. still has a similar ban in place.

Related: Israel is ending their ban on blood donation from queer men. Why isn’t America?

CBS said that it revised its policy after a thorough 90-day “assessment of evidence supporting the safety of the revised donor screening.” All donated blood in Canada is screened for HIV and other transmissible diseases before being given to others.

“Today’s authorization is a significant milestone toward a more inclusive blood donation system nationwide, and builds on progress in scientific evidence made in recent years,” Health Canada said in a statement.

The now-defunct celibacy requirement was a holdover from the HIV epidemic of the 1980s and ’90s. In 1992, thousands of Canadian blood recipients were exposed to HIV-infected blood that hadn’t been properly screened by the then-active Canadian Red Cross.

The U.S. Food and Drug Administration initially began its lifetime ban on gay, bi and queer male blood donors back in 1983. In 2015, these donors were allowed to give blood after abstaining from sex for 12 months. Even after the abstinence period was reduced to three months, the requirement remained discriminatory since no similar abstinence period was required from women or heterosexual men.

In April 2020, attorneys general from 19 states and the District of Columbia signed a letter urging the U.S. Department of Health and Human Services to end the U.S. Food and Drug Administration’s ban on blood donations from men who have sex with men.

A 2014 study from the University of California, Los Angeles School of Law Williams Institute said that getting rid of the gay and bi blood donor ban would “produce over 2 million additional eligible blood donors, including nearly 175,000 likely blood donors, and would produce nearly 300,000 pints of additional donated blood annually,” potentially saving the lives of more than a million people.

What did a transgender woman learn about being a man after she transitioned?