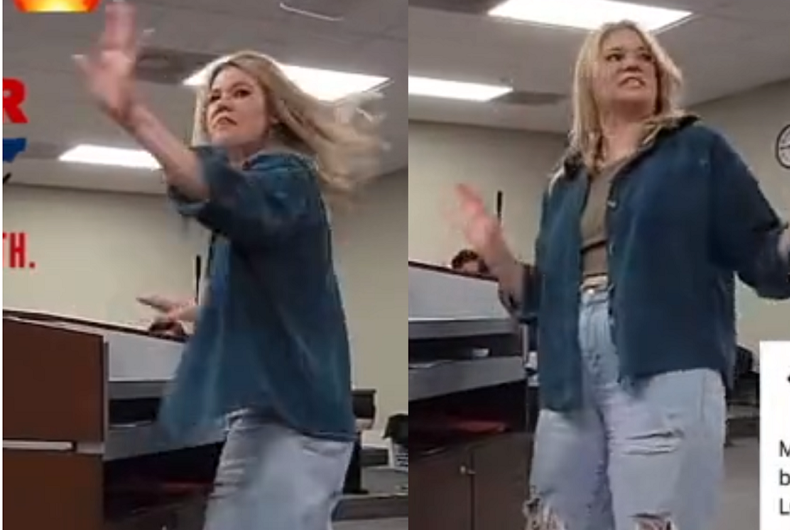 Jessee Graham going off at the Maury County Board of TrusteesPhoto: Screenshot

A woman came to a board of trustees meeting and trounced conservative Christians after a county’s library director was driven from his job for refusing to take down a Pride display.

Maury County, Tennessee Library Director Zachary Fox resigned last week after getting pressured by a group of residents who said that the LGBTQ-themed books were inappropriate, according to WSMV-4. Fox said that his last day working would be tomorrow, October 28, but that he would stay until a replacement could be found.

“Coming to this decision has been incredibly difficult, but it is in the best interest of my family and my own health and well being,” he wrote.

Maury County Commissioner Aaron Miller – who runs the local organization Foundation for Liberty and Freedom – was at the center of the controversy, calling on Fox to resign.

“The library invested your tax dollars into a book display for LGBT History Month,” Miller told the Epoch Times. “This was surprising, considering that June is already Pride Month, a period of celebration for the LGBT community.”

Miller said that the materials were “child-targeted.”

“As a father, my line in the sand was crossed when the library exhibited a bright, colorful display of no less than 28 books for this past Pride Month, all of which were written and marketed specifically for minors, especially young children,” he told The Daily Herald.

Last night the Maury County Board of Trustees held a meeting that got heated. And one woman – identified as Jessee Graham – is going viral for her righteously angry speech about the people who drove Fox from his job.

“Our town has never seen so much homophobic crap as we have since Miller came along,” Graham said. “These people have been with us this entire time and we have never had a problem with it. They have never done any of the vile and disgusting things that that man and his weird cronies have leaked out of their mouths.”

“I’ve never been sexually assaulted at a drag show, but I have been in church. Twice!” she continued, adding that the church “told me it was my fault.”

She called out the group’s homophobia, accusing them of wanting to “completely annihilate a group of human beings who just wanna exist.” She said that if any of her four kids are “part of this community, they will be lucky because there is not a whole lot of families that would love their child unconditionally.”

“And the fact that they want to take that away from children, that is child abuse, to immediately tell your child that he is wrong for feeling like he doesn’t belong in conversion therapy.”

🔥🔥 MUST-WATCH: “I’ve never been sexually assaulted at a drag show, but I have been at church. TWICE! The men told me it was MY fault.”

The board approved Fox’s resignation.

Earlier this month, a woman who introduced herself as Stephanie went on a diatribe at a meeting discussing LGBTQ books in the library system in Maury County that was caught on video.

“I will not raise kids in a county that has sexual-oriented books on the counter,” she asserted. She told the group they need “to understand that God’s judgment is for Christians and non-Christians, and a fear of the Lord, if it’s not upon you, it will be upon you in hell.”

The woman said she represented “every law-abiding, taxpaying citizen here in Maury County,” then told her would-be constituents, “you are blind” not to see that “when perversion permeates our county, that’s when the devil gets our children.”

“Obviously, revelation prophecies are occurring right before our eyes,” she said.

A critical school board race has gained national attention. This out 22-year-old wants to win it.

Get to know out Michigan Attorney General Dana Nessel