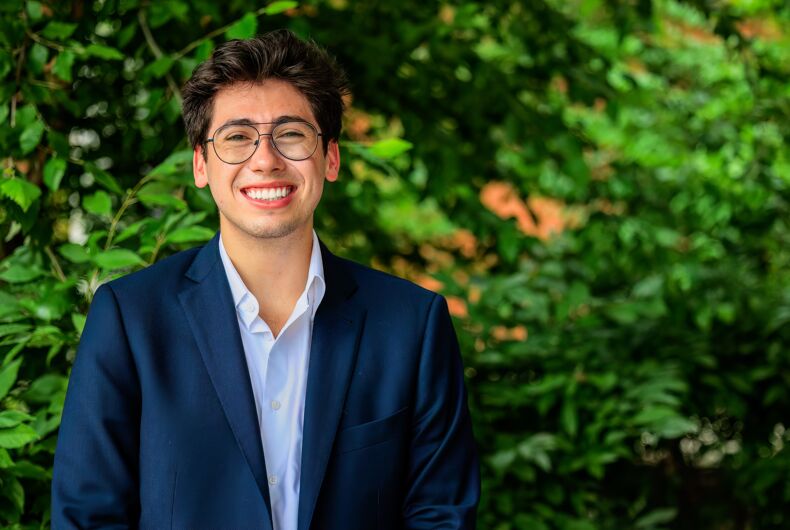 22 year-old Nick Gothard, running for a seat on the Board of Education in Loudoun Co. Virginia's Broad Run district.Photo: Nick Gothard for Broad Run/tylerjdbegley

In Loudoun County, Virginia this fall, a school board election could be a bellwether for Republican and Democratic prospects across the country in this year’s midterm elections.

Two races for seats on the Loudoun County Board of Education are charged with issues seen in contests from coast to coast, issues like “parental rights” and book banning, crime, inflation and the pandemic hangover. The Northern Virginia county has also attracted national notice because of its proximity to Washington, D.C. and the special attention paid by the state’s Republican governor, Glenn Youngkin, who views it as a laboratory of sorts for policies he thinks could take him to the White House.

One of those school board seats is sought by Nick Gothard: a self-assured, well-spoken, out gay 22-year-old Democratic standard-bearer.

“My future school board colleagues and other elected officials, when I remind them the year I’m born, they hate that,” Gothard, born in 2000, and running to represent Loudon County’s Broad Run District, told LGBTQ Nation.

Gothard was speaking from his home in Ashburn, where he was raised and attended school. It was the end of a long day on the campaign trail, which he described as “good”, drawing out the word as if recalling and grading the day’s events. “You run for school board and you think no one’s gonna care, and then you get the Washington Post calling you up, and you’re like, ‘Great, let’s, let’s chat.'”

For a young man, Gothard brings a weighty resume to his fight for the Broad Run seat.

Along with a BA in Political Science from Lewis and Clark, where he entered as a sophomore and studied Rhetoric, Gothard was appointed and unanimously confirmed twice by the Board of Supervisors to serve on the Loudoun County Community Services Board, which addresses mental illness, substance abuse, and developmental disabilities.

He also serves as a member of the Loudoun Trauma Informed Community Network, a multi-sector coalition focused on building resilience, particularly in the wake of the COVID-19 pandemic. Previously, he served on the Board of Directors of Equality Loudoun, the county’s oldest and largest LGBTQ nonprofit, before stepping down to run for school board. And finally, he founded a nonprofit consulting firm, which serves people and organizations across the U.S. by providing policy, strategy, and technology solutions.

While the Broad Run seat is ostensibly non-partisan, all three candidates in the race have a political affiliation. Gothard is the Democrat, up against two right-leaning opponents. Tiffany Polifko earned the Loudoun County Republican Committee’s endorsement, while the current occupant of the seat, Andrew Hoyler, is running as an Independent in name only, according to Gothard.

Polifko is on the same page as Gov. Youngkin and MAGA Republicans, complaining about sexually explicit books in school libraries, while Hoyler advocates giving “parents an opportunity to receive and give feedback on a number of important issues,” Gothard says.

It was Hoyler’s appointment to the seat last year, after the death of the previous occupant, Leslee King, that inspired Gothard to run.

“She was a good friend, a phenomenal public servant,” Gothard says. Hoyler, an airline pilot by trade, had run and lost against King in the previous election. “I was open-minded about [Hoyler taking the seat],” says Gothard, but he “thought that somehow he had received a mandate from the entire community to act antithetical to all the policies that Lesley would have supported, and run things in his own way.”

“It was very last minute for me. We gathered 300 or so ballot petitions, which is more than twice what you need, in a single weekend, under cover of night, actually, because you know, I didn’t announce yet,” he says. Gothard submitted paperwork the day it was due in June, got on the ballot and “it’s just been a sprint ever since then.”

Gothard’s priorities on the board would be literacy and infrastructure.

“Our literacy rates in Loudoun County have been going down since before COVID. We know it’s because we’re using a curriculum that isn’t backed by the research of literacy education, or on the right track to getting a reading curriculum that works better for our students and for our teachers. But we need someone who’s willing to be vocal about the kind of emergency that it is, to make sure that every student is able to read at grade level. I’ve been surprised, I think, when I knock on doors and talk to voters. There are a lot of reading specialists that live in my district, and a lot of them, as soon as they talk about literacy education, light up and let me know that I’ve got their vote.”

On infrastructure, he mentions a local school that will soon be completely rebuilt because it has fallen into complete disrepair.

“We really need to be looking at how facilities like that get there in the first place, and how we can be proactive about what attention we’re giving to our facilities to make sure that, you know, we don’t have students suffering the negative consequences of failing infrastructure,” Gothard says. “Right now, our policy that guides those things is less than a page long, which is absurd.”

Growing up in the district, the son of parents on a knife’s edge economically, it’s clear Gothard feels proprietary about the state of the schools that gave him so much.

“I think it’s a value that my parents had for our family that was instilled very early on, because they emphasized that this is very much a privilege for us to be able to live in this community and have everything that the school system did afford us, because folks across the country aren’t all as lucky as we are.”

Gothard’s final pitch: “I’m hoping to deliver for our community, both in Loudoun, as well as across the country,” he says. “I really think that we’re on track to win this thing.”

Editor’s note: A previous version of this article mistakenly said that Equality Loudoun endorsed Gothard. It has not done so.