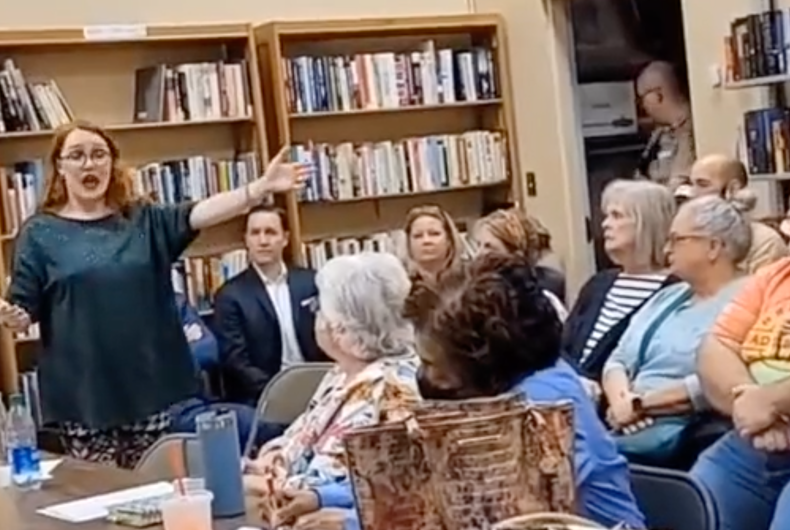 In Maury County, TN this week, a library committee listened to a three-minute Old Testament, anti-LGBTQ, pro-MAGA diatribe, captured on video, from a woman claiming to speak on behalf of “God Almighty” and millennials.

Said one commenter: “On behalf of millennials – we don’t know her.”

The same could be said of the library committee and most of the residents of the rural county in Middle Tennessee; the woman just moved there from Indiana.

The video was captured during a meeting to discuss LGBTQ books in the local library system. Maury County Public Library has two branches, in Columbia and Mt. Pleasant.

The 20-something, who identified herself as Stephanie when she rose to speak, wasted no time telling the assembled residents where she stood on the issue.

“I will not raise kids in a county that has sexual-oriented books on the counter,” Stephanie asserted. She told the group they need “to understand that God’s judgment is for Christians and non-Christians, and a fear of the Lord, if it’s not upon you, it will be upon you in hell.”

The woman said she represented “every law abiding, taxpaying citizen here in Maury County,” then told her would-be constituents “you are blind” not to see that “when perversion permeates our county, that’s when the devil gets our children.”

“Obviously, revelation prophecies are occurring right before our eyes,” she said.

Switching to MAGA-mode, the woman demanded the assembled “understand the act of repentance is for the security of our nation. We already have so many illegal aliens here who are bringing fentanyl. They are killing our children, our youth!” A middle-aged woman sighed deeply.

Her voice rising, Stephanie then told the meeting, “You guys are here to serve us, with all due respect. My taxes pay this place. This was here by the grace of God, to educate, not pervert.” She added, “You serve our country second, you serve our God, the God of Abraham, Isaac and Jacob, first.”

One attendee can be heard whispering to another: “Let her hang herself.”

“I will not let my children be raised in a county like this!” Stephanie sermonized.

A Christian woman in Maury County, Tennessee argues against LGBTQ-themed books at her library and tells everyone they’re going to hell pic.twitter.com/F6McXs8Gs4