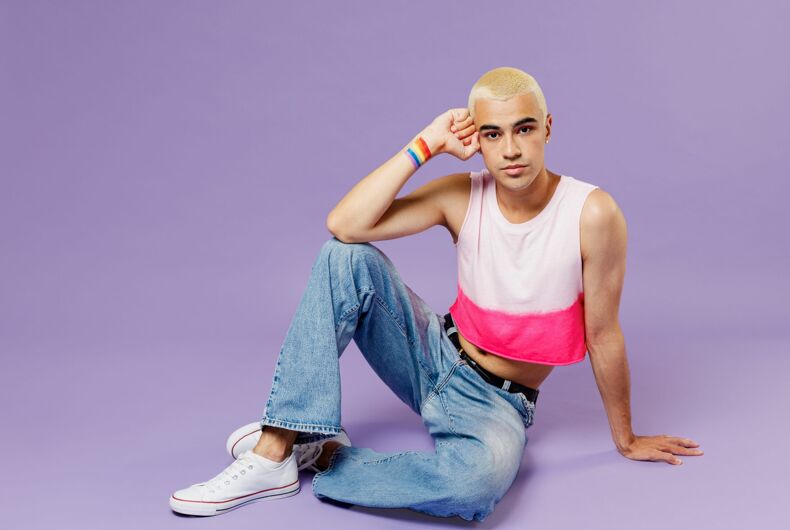 If you’re gay, skinny, and baby-faced, chances are you’ve been called a twink or at least self-identify as one. “Twink” is a commonly-used word within gay communities that refers to someone in their late teens or early twenties with a very slim build and little to no body hair.

However, there is a bit of controversy surrounding the term, which some people say can be derogatory. If you’re confused about this gay slang word, this quick guide will tell you everything you need to know!

What Is A Twink?

The word “twink” describes gay men in their mid-to-late twenties with slim physiques, no body hair, and a youthful appearance. The term is exclusionary, with its pejorative or opposite being “bear”, a gay, large, and hairy man.

Etymology Of The Word “Twink”

There is no official origin to the word “twink”, but many have speculated its beginnings. According to the Oxford Dictionary, the term “twink” started making its rounds in the early 1970s. Others think the word might’ve been derived from the 20th-century British slang term “twank”. “Twank” refers to gay male prostitutes who are “willing and ready to become any dominant man’s partner”.

In the 1800s, the English referred to young, hairless men as “mollies”, while Germans called them “knabes”. The latter gained tremendous criticism for directly translating the word “boy”.

Finally, while most linguists find it skeptical, some assume the word is derived from Twinkies, which share the same “small and blonde” features.

While all twinks share some similarities, there are enough differences that subcategories have developed. Spend enough time with the gay community, and you’ll likely meet the following twinks:

Like other gay tribes, twinks have a set of letter and number symbols used for self-identification. Twinks use these symbols to communicate through email or internet forums like Reddit.

Some common symbols in twink code include:

Twinks first appeared in mass media around the late 1990s and early 2000s. In movies like But I’m a Cheerleader and the series Queer as Folk, twinks were considered the punchline of the joke yet were the preferred representation of gay men over larger, hairier bodies.

Today, you’ll see the rise of “art twinks” who are mostly straight but suit the aesthetic stereotype. Many rising stars are less alpha-like and leaner, with action movie protagonists played by actors like Tye Sheridan and Harry Styles.

Even luxury fashion brands gravitate towards boyish models and actors like Jaden Smith and Lucas Hedges.

Over the years, the word “twink” has garnered a few unwanted stereotypes. And, unlike terms such as “queer”, “twink” is more commonly used in a derogatory way today.

Many people (even within the gay community) assume that twinks are effeminate, camp, insecure, and inexperienced, despite being hypersexualized in mass media. Over the years, many have scrutinized “twink” for being ageist, fetishized, and used inappropriately. Not only have others incongruously glorified child-like appearances, but they have also treated twinks themselves like children.

Furthermore, the twink subculture can play to normative and unrealistic beauty standards. There may be pressure to remain lean, young, and fit, putting vulnerable gay men at a greater risk of developing body dysmorphia.

The term “twink” refers to a subgroup of gay men who are youthful, thin, and have virtually no facial or body hair. But while many in the community have openly embraced this term, others are wary of its potentially derogatory (and harmful) connotations.