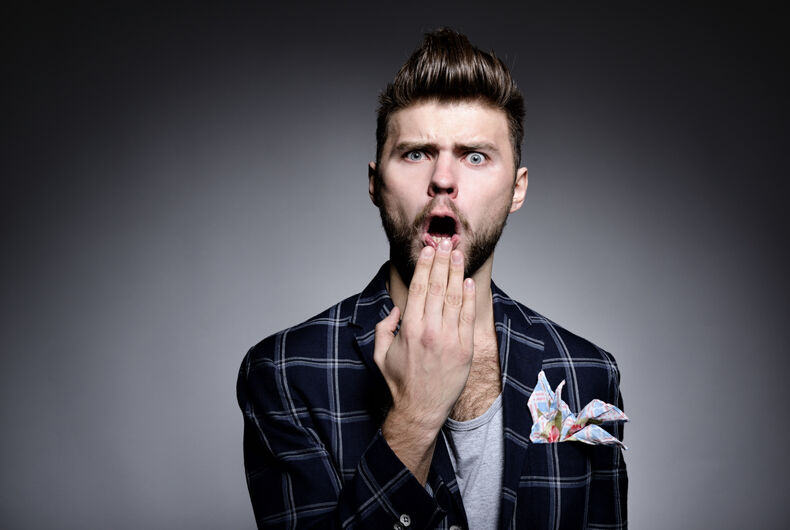 You might want to sit down for this. According to a new study, money and muscles are the qualities gay men find most attractive and all it took for experts to discover this was surfing through social media.

Researchers from Coventry and Aberystwyth universities analyzed posts and interactions on Tube Crush, a social media site where users post pictures of men spotted on the London Underground, over a period of three years.

New York City has its own version of Tube Crush, an Instagram called Hot Dudes Reading, which features similar fare, mostly from the city’s subway.

The study found that the majority of pictures posted on the site were of white men, indicating that white male privilege is still an attractive quality.

Photos and comments also focused on the men’s muscular biceps, pecs, and other bulges suggesting sexual endowment and emphasized items that suggested men’s wealth, like smartphones, watches and expensive suits.

“This celebration of masculine capital is achieved through humor and the knowing wink, but the outcome is a reaffirmation of men’s position in society,” lead author Adrienne Evans said in a statement.

Evans says the problem is, “although it appears as though we have moved forward, our desires are still mostly about money and strength.”

It took an academic study to figure out what anyone who doesn’t fit the white, well-off, workout bunny standard of conventional male beauty that’s everywhere we look in gay media already knows.

Dejan Jotanovic calls it the Antoni effect, named for the breakout star of Netflix’s relaunch of “Queer Eye,” who’s rocketed to fame despite having no discernible extraordinary talent beyond dark-eyed good looks and chiseled abs. In fact, some question whether the show’s resident culinary expert can really even cook.

Jotanovic says the fact that we’ve seen more of Antoni than any of the shows other stars “exposes not only our indifference to meritocracy, but also which bodies are given a seat at the dinner table.”

“While we enjoy telling ourselves that our community actively champions body diversity,” he writes, “the crude reality is that white, muscular, masculine and handsome men still hold the hegemony and power in our culture.”

One doesn’t have to be an academic or intellectual to figure this out. A quick frolic through Grindr or any number of apps where gay men gather in search of true love or the next trick, where race is just a “preference” and profiles regularly declare “No Blacks, No Asians, No Fats or Fems.”

“One of American culture’s most recurrent and endemic themes is the adoration of whiteness,” Phillip Henry writes. “White faces are sold as the forefront of everything, to be sought after and adored.”

Throw in wealth and enough leisure time to achieve washboard abs, and you’ve got what Erik, the gay (former) “incel” defined as the conflict between expectations that led to his bitterness against the “Instagays.”

“You’re expected to be financially stable, to look a certain way, to have the right partner and the right hookups,” Erik said. “When you can’t live up to that image, then the inferiority complex comes.”

So, another study has confirmed what we already know. Our culture still privileges whiteness, masculinity, and wealth over everything else.

It still doesn’t answer the most crucial question. What do we do about it?