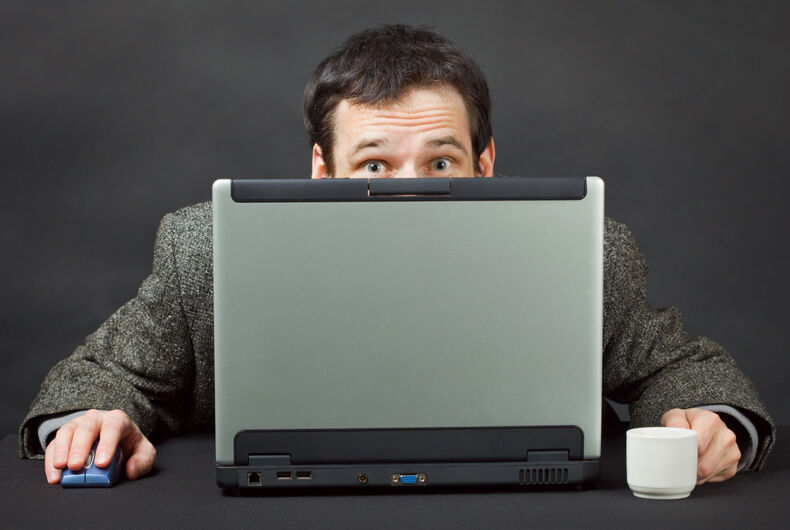 Remember when we asked where all the gay incels were? Well, somebody found one.

Over at Huffington Post, Michael Hobbes has an interview with Erik, a 28-year-old gay man, and incel.

As a refresher, ”incel” stands for “involuntary celibate.” The term originated in the darkest corners of the alt-right web. Straight men who believe women unfairly debt them sex use the word to describe themselves and their movement.

Erik, not his real name, is a midwestern government worker who describes himself as this way: ”I’m pear-shaped. I’ve got a tummy, man-titties and a big squishy butt. I also have a nice haircut, a clean face and a nice smile.”

Still, Erik says, ”I feel like a failure as a gay guy,” he wrote, “because I’m 28 and I haven’t had much sexual experience even though I’ve been out since I was 18.”

Erick is one of the countless gay men who do not and cannot conform to the body type promoted as desirable in gay media: young, white, and muscular or slender ”twink.”

Erik’s story isn’t that different from those of the men who frequent the incel message boards, just in a different context. The same sense of rejection, resentment, hurt and jealousy resonates in Erik’s words.

Hobbes writes that Erik’s anger and bitterness were driven by the feeling that the conventionally attractive gay men were status-hoarding and keeping him from achieving the status he sought — status signified by being deemed desirable enough to attract sex partners.

It turns out that while men have higher status than women in society at large, there are wide disparities among men. When men see other men enjoying the status they lack, desire, and believe they deserve they think, ”That’s not fair.”

In other words, Erik incel phase was driven by the same sense of entitlement as the greater incel movement.

What happened to change things for Erik? Some of his targets responded to his messages by revealing the struggles and difficulties in their lives that didn’t show in their online profiles.

”It didn’t make me feel better automatically, ” said Erik. ”But I started to think that if these guys were conventionally attractive and have what I’m supposed to have and they’re still miserable, then maybe I don’t need to worry.”

Erik is now dating a guy he met on OKCupid.

“I’d like to think I’ve improved and am content now that I found someone who not only I like but who actually thinks I’m beautiful,” he says.

But sometimes the resentment and envy still surface, because some people seem so attractive and he thinks he never will.

Erik says the mainstreaming of gay people may have caused a conflict between expectations and reality. ”

You’re expected to be financially stable, to look a certain way, to have the right partner and the right hookups. When you can’t live up to that image, then the inferiority complex comes.”

Pride in Pictures 1972: An angry mom starts another movement

If marriage equality was overturned, would states be able to enforce old bans?