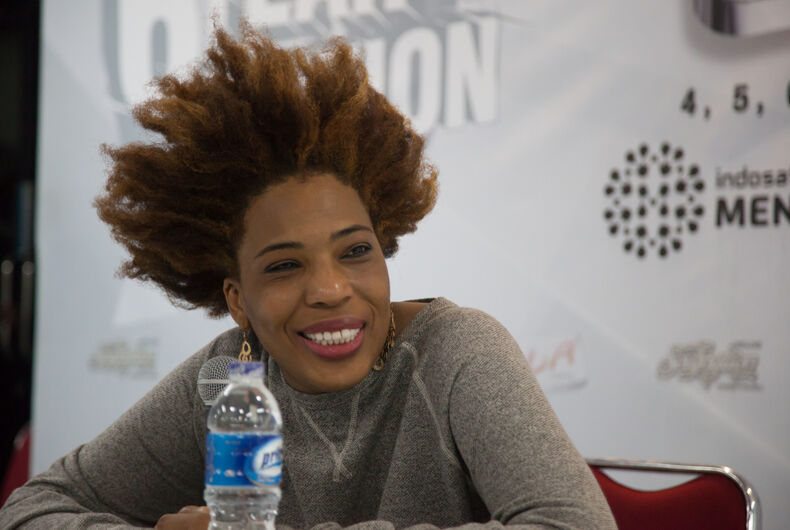 Singer Macy Gray went on an anti-transgender rant on Piers Morgan Uncensored last night, where she said a woman is someone “with boobs,” complained about pronouns, and said that trans women aren’t women.

Host Piers Morgan – who has a long history of anti-LGBTQ statements – asked Gray to define what a woman is and she said, “A human being with boobs, you can start there.” Morgan laughed.

Related: JK Rowling now thinks she can say who’s a lesbian & who’s not

“That starts getting confusing, the whole he/she/they,” Gray continued.

“It’s like the issue of transgenders in sport,” Morgan said. “I support all trans rights to fairness and equality, but not when you have people born to obvious physical superior bodies, transitioning and then thrashing at their sport.”

“Me too,” Gray responded. “I totally agree. And I will say this and everybody’s gonna hate me but, as a woman, just because you go change your parts doesn’t make you a woman. Sorry.”

“I know that for a fact,” she added. “Like if you want me to call you a ‘her,’ I will because that’s what you want. But that doesn’t make you a woman just cause I call you a ‘her’ and just because you got a surgery.”

“Just every, like, women go through just a completely unique experience, and, and surgery or, you know, finding yourself doesn’t change that,” she continued. “You know, being a, a little girl is a whole epic book, you know, and, and you can’t have that just because you wanna be a woman.”

Morgan said that the “cancel culture mob” went after J.K. Rowling for making similar statements, and Gray said: “But it’s the truth… I don’t think you should be called transphobic just because you don’t agree with, you know, I, I- Just, there’s a lot of, you know, judgement and throwing, you know, stones at people for, for just saying what it is, you know what I mean.”

Many of her LGBTQ fans were disappointed with her statements and some compared her to singer Bette Midler, who made similar comments this weekend on social media.

Chiiiile … Macy Gray was right about one thing. Surgery didn’t make me a woman. I was one long before I even had access to my medical transition and even if I never had it I’d still be who I am.

So, Macy Gray says that surgery doesn’t make you a woman?

Trans women are women. Surgery can only affirm what we already know to be true.

I did not have Macy Gray being a Terf on my 2022 bingo card. In fact this bingo card has been fucking useless so far.

Macy Gray is my friend. I adore her, but I’m shocked she doesn’t understand what she’s talking about. If or when I see her again I’ll try to explain to her why she seems not to know about what being trans is. Ugh. Sad. So sad.

Macy Gray: You're the wind beneath my wings now hold my beer

On Twitter, Gray defended her comments, saying that she “wasn’t defining trans women, just women,” implying again that trans women are not women.

The relevant exchange starts at the 5:58 mark in the video below.

While Morgan said that he is concerned about trans women “thrashing” cis women in sports, he also complained several weeks ago that Wimbledon was going to start honoring women champions by using their own names instead of their husband’s names.