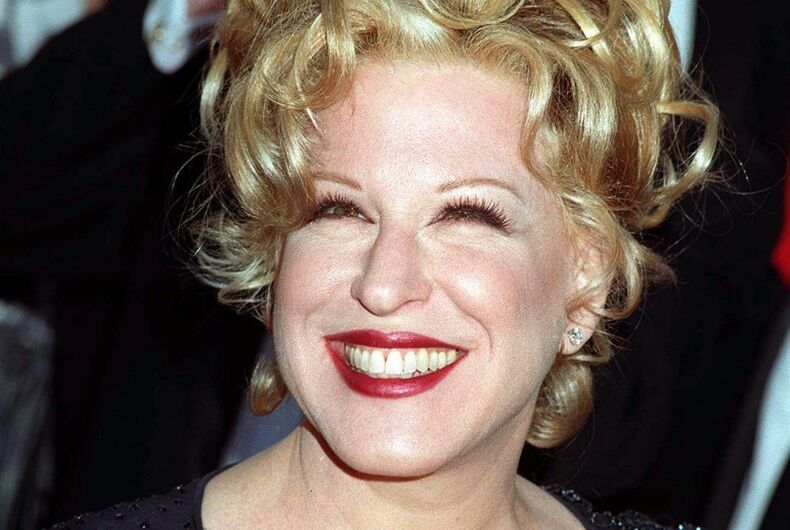 Singer and gay icon Bette Midler is getting slammed for an anti-transgender screed she posted to social media claiming that recognizing the humanity of transgender people will “erase” women.

“WOMEN OF THE WORLD!” she wrote. “We are being stripped of our rights over our bodies, our lives and even of our name! They don’t call us ‘women’ anymore; they call us ‘birthing people’ or ‘menstruators’, and even ‘people with vaginas’! Don’t let them erase you! Every human on earth owes you!”

Midler was referring to inclusive language used in some contexts to refer to people of all genders when it’s appropriate. For example, “menstruators” refers to people of any gender who menstruate, including many cisgender women, non-binary people, and transgender men.

Midler has had many gay fans in her decades-long career. She performed in a gay bathhouse in the early 70s – something she’s still proud of – and has used her platform to speak out for gay rights.

So many of her fans were disappointed to see her tweeting a J.K. Rowling-esque statement about how trans identities are an attack on cis women’s identities.

No one is trying to erase women with inclusive language about people who need abortion care. No one is calling you anything but what you prefer. You should extend that courtesy in return.

Really disappointed in this as a trans man and a Bette Midler fan.

Bette, including trans men in the conversation about reproductive health does not harm women. We have the same organs, and even greater vulnerability, as cis woman.

No. Don’t fall for the anti-trans panic fake nonsense. No one is erasing women. In a few small healthcare cases where appropriate they are using trans inclusive language. That’s all.

Trans people did not overturn Roe V Wade. Trans people tend to be one of the most pro-choice groups of people you’ll ever meet, as bodily autonomy in medical care is kind of crucial to trans existence. They are not your enemy

Cis women have nothing to lose and everything to gain by acknowledging the links between the anti-abortion movement and transphobia, which are all about attacking bodily autonomy in support of patriarchal supremacy.

No, Bette. Being inclusive raises us all up, it does NOT strip us of our rights. Come on, don’t do this. Don’t divide us MORE.https://t.co/DinlOiQN8x

What words would you use to be inclusive with the transmen who still have uteruses and can get pregnant?

I am a woman. People call me a woman. I have no problem with people calling women women.

I just don’t think we should call groups of people that aren’t all women “women.” That’s not erasure; it’s reality.

Nobody is saying you shouldn't be a woman. We're just saying that others who are not women also need access to eg abortion care and it's accurate and loving to use language that includes them.

Like how going from "mankind" to "humankind" didn't erase men but included women.

I am not a woman. I menstruate. I’m in IVF & trying to gave a baby & will be a pregnant person. I thought you were an ally to queer folks but I guess queers like me don’t count to you.

With all due respect, Bette, trans-inclusive language doesn't take anything away from us.

Bette – the trans men, trans masculine, and nonbinary people I know (and I'm confident most I don't) are fighting tirelessly for equal rights, very much for women as well. What is helpful about attacking us? Why be so cruel about us when we're all in the same fight?

As a woman without a uterus, I support inclusive language to normalize that trans men need reproductive healthcare too, 100%

We're all fighting the same fight.

Bette. do you remember just a couple months ago when you shared this?

are you saying you've changed your opinion on trans people since then?https://t.co/JOIH14Nsy6