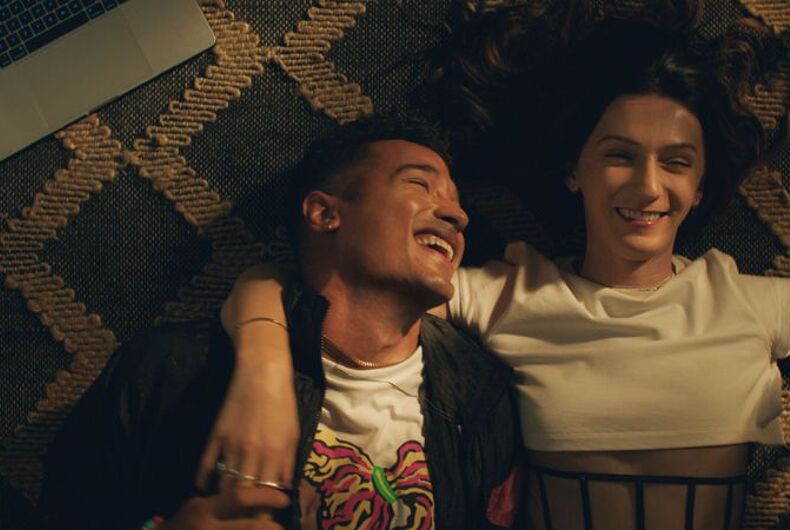 Brodie and Ruthie share a moment in the new "Queer As Folk"Photo: Peacock

The new Queer As Folk reboot is a worthy successor to the originals. It is beautifully shot, earnestly acted, has a slappin’ soundtrack, and amazing drag numbers. It’s also equal parts groundbreaking, jaw-dropping, unflinchingly sexual, campy, and melodramatic.

The reboot reimagines the 1999 British series and its 2000 U.S. adaption for a modern generation with a diverse cast of recurring, non-white, disabled, gender-fluid, and transgender actors. They joyfully have sex, do drugs, and lip-sync the house down boots. They also raise families, effectively creating the sort of show that would give the Republican National Committee heart attacks.

Related: “It’s a Sin” is the gay series for straight people who hold candles to prove they’re AIDS activists

The reboot makes a bold (and some would say exploitative) choice at the end of its first episode by depicting a Pulse-style mass shooting at its fictional gay bar, Babylon. This is especially striking considering that the show premieres just three days before the Pulse shooting’s sixth anniversary.

To director Stephen Dunn’s credit, he and his writers closely consulted with actual Pulse survivors to create an entertaining (though sometimes uneven) story of resilient queers recovering from trauma and rebuilding their community while navigating their own personal flaws.

“While the series starts with this horrific event, the story we are ultimately telling is of a community rebuilding after personal and collective trauma,” Dunn said. “It’s that resilience that defines our show. The hate crime that tears our characters apart in the first episode ignites the fire that brings them together and sets the stage for an emotional and empowering season.”

The show avoids sinking into tragedy- and trauma-porn by compassionately delving into some juicy issues with frankness, humor, and rage; issues like the corporatization of queer grief, befriending exes, the best way to eulogize dead people who were total sluts, the lingering fears around becoming HIV-positive, and the difficulties of partying while parenting, to name a few.

True to its source material, the drama builds as the characters’ secrets pile up, leading to catty reveals, shouting matches, and (of course) dramatic walkouts aplenty. Truly, the show feels its most joyful when it revels in mischievous humor and camp melodrama unfolding in candy-colored settings.

“With Queer as Folk, we aimed to depict queer characters who live in the messy middle,” said the show’s executive producer Jaclyn Moore. “People who are complicated. Who are funny and caring and flawed and sometimes selfish, but still worthy of love. Still worthy of narrative. As a trans woman, I’m excited to take steps to move past telling stories that seem to just be arguing for our basic humanity. My hope is that Queer as Folk is one such step.”

When the original series first aired, it was some of the only gay TV content available. It smartly avoided then-common depictions of gay people as tragic victims of HIV and homophobia. Instead, it told groundbreaking stories of queer joy and romance. The old show also had an apparent obligation to discuss every single thing that happens to people in the gay world: the pain of the closet, the risks of cruising, the heartache of dating, the loneliness of ageism, the pain of conversion therapy, and so on.

Now that the web has provided far more queer content than anyone had access 20 years ago, the reboot seems determined to represent the most marginalized queer identities, addressing a huge gap that went unaddressed in the original shows’ entirely white cis narratives.

In the reboot, Ruthie and Mingus, in particular, are given radiant and fully-realized story arcs, bravely acted with nuance — a praiseworthy TV achievement for two gender non-conforming characters and a rarity for any media, even in this modern age.

Alas, the reboot has some shortcomings which also existed in the originals.

Foremost, many of the supporting roles remain rather flat, providing queer stock characters, such as the desirable hunk, the sharp-tongued queen, the momma gayngel, and the golden-hearted sex worker. These characters also struggle with drug addiction, physical disabilities, community trauma, and anti-slut stigma, respectively. While these subplots could be revelatory, some of these conflicts end up showing very little about how these challenges actually impact these marginalized people’s internal and daily lives (outside of the occasional dramatic admission).

Other social issues go altogether unexamined. Racism and poorness get no mention, even though New Orleans is a mostly Black city with a high poverty rate. There’s no overt bi- or trans-phobia. People of size rarely appear onscreen. In a moment of grief-fueled rage, another character defaces a public memorial and literally blows up someone’s car (leaving evidence of his identity underneath), but nothing comes of it.

Some of this makes sense, though. Marginalized communities have grown tired of being solely defined by the oppressions they face. Plus, the original Queer As Folk operated as a part-time, fan-service fantasy where reality only occasionally reared its ugly head and challenging storylines sometimes magically resolved themselves.

If marginalized communities feel authentically portrayed in the new Queer As Folk and flock to the show quickly after its premiere, it could help determine whether it gets renewed. It certainly deserves a second season.

The communities it represents have waited far too long for humane depictions of themselves on the small screen. This reboot gives a wider swath of the queer community an opportunity to see itself represented on TV with grace and strength, its members struggling against real issues and ultimately succeeding, even if that success sometimes comes too easily.

No matter its ultimate fate, the reboot will undoubtedly inspire a diverse new generation of queers and serve as a career springboard for its talented cast and crew, all of whom may go on to create even queerer stories — the kinds we’ve all waited lifetimes to see.

Parents & teachers sue school for being too accommodating of transgender students