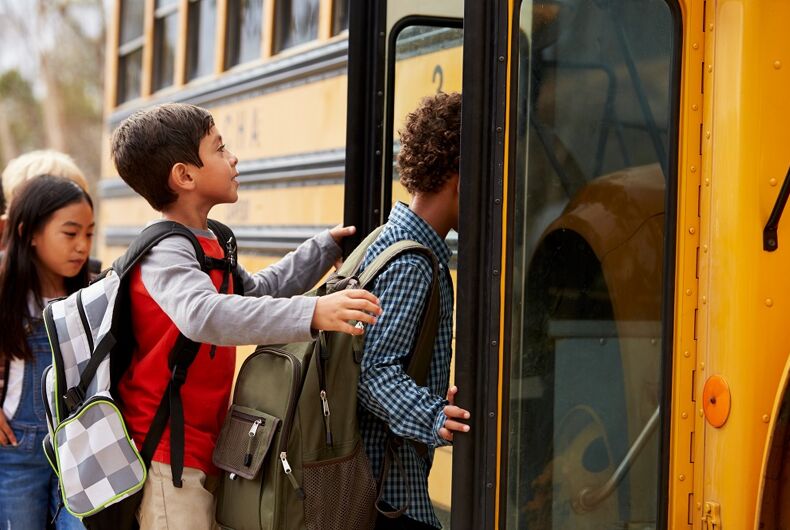 Harrisonburg City Public Schools is facing a lawsuit from a group of anti-LGBTQ parents and teachers regarding a school division policy on gender identity and the treatment of transgender athletes. The policy requires teachers to ask students what their preferred names and pronouns are and to utilize them in the future.

If the policy is overturned, then a negative precedent could be set regarding LGBTQ students’ rights in Virginia.

The lawsuit was filed in Rockingham County Circuit Court by Deborah Figliola, Kristine Marsh, Timothy and Laura Nelson, and John and Nicole Stephens. They are represented by Alliance Defending Freedom (ADF), an anti-LGBTQ hate group based in Scottsdale, Arizona.

The plaintiffs claim that the policy violates their First Amendment rights to freedom of religion and freedom of speech.

The policy goes on to state that if a student’s preferred name and pronoun differ from their sex assigned at birth, the information is shared with the school’s guidance counselor who will then facilitate a conversation on gender identity with the student. Teachers are not permitted to notify a student’s parents of the request.

The policy was adopted last August after the Virginia Department of Education issued a model policy on the treatment of transgender students and required all school divisions to adopt similar policies.

The lawsuit claims that the HCPS policy requirements go beyond what the Department of Education put into place.

“There hasn’t been a case that’s been exactly like this before that’s been brought in Virginia. So it’s going to be incredibly important for other jurisdictions to see what the outcome of this case might be,” said Amanda Reiman Johnson, a lawyer and legal analyst at AC Reiman Law Firm in Culpeper, Virginia.

Reiman Johnson went on to say that while there has been no precedent set in Virginia regarding similar cases, the state Supreme Court does tend to rule in favor of greater parental involvement in schools.

“The Virginia Supreme Court has routinely upheld that parents should have the ultimate say in dictating how their child is brought up whether that is regarding their education or their own religious beliefs,” she said.

Reiman Johnson went on, “One of the key arguments in this entire case hinges on something that we saw earlier this year and in years prior regarding the COVID vaccine and what exactly does a sincere religious belief mean?”

A sincere religious belief in law is a moral or ethical belief about what is right or wrong that is held with the strength of a religion’s traditional views and not of a simple personal opinion.

The school division maintains the policy is to meant to protect trans students and is part of its nondiscrimination policy.

“The defendants are saying listen we have to adhere to these state rules that provide some type of guidance when it comes to adhering to what the students want to be called,” said Reiman Johnson.

Harrisonburg City Public Schools released the statement below in regard to the lawsuit: “Our School Board has general nondiscrimination policies within its Policy Manual and maintains a strong commitment to its inclusivity statement, all of which are available on our website. In specific student situations, the focus is always to foster a team approach that includes and supports the unique needs of the student and family on a case-by-case basis.”

“HCPS also has systems in place to listen to and respond to employee concerns. We are dismayed that this complaint is coming to us in the form of a lawsuit in lieu of the collaborative approach we invite and take to address specific needs or concerns, an approach that we believe best serves the interests of our students, staff, and families.”