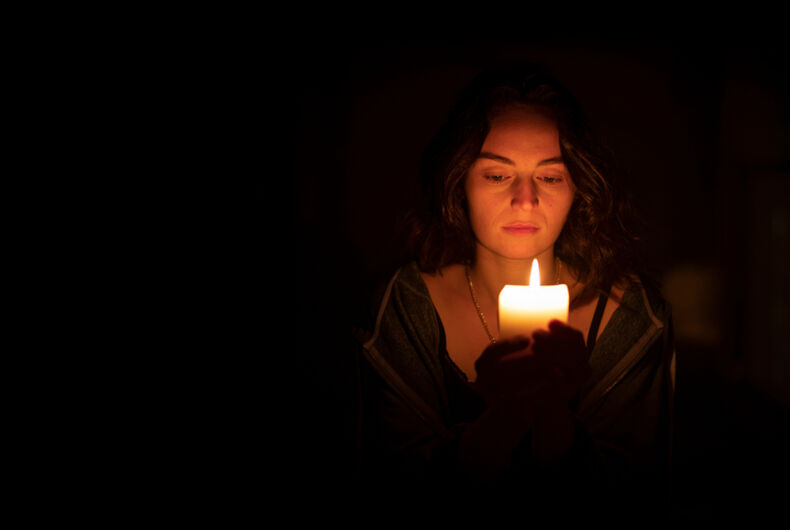 The promise of a new, ambitious television series about “what happened” to gay men in the 1980s is tremendously exciting for long-term HIV/AIDS survivors like myself, starved as we are for representation in the media and for another chronicle of our history to be told. It is often a promise unfulfilled.

Already, the British limited series It’s a Sin is being discussed in the same breath as Angels in America, which is, sadly, akin to equating To Kill a Mockingbird to My Cousin Vinny because they’re both about lawyers.

It’s a Sin focuses on the lives of a group of young gay men in London during the dawn of the AIDS pandemic. It is the work of writer/producer Russell T. Davies, the creator of the original Queer as Folk in the UK. Davies never addressed HIV/AIDS in Queer as Folk, surprisingly, and has said that the largely autobiographical It’s a Sin is meant to correct that.

Davies needn’t have bothered. While It’s a Sin boasts gorgeous production values and terrific performances (and record-breaking viewership during its recent broadcast in the UK), it also reinforces dangerous, stereotypical myths about gay men in general and people living with HIV in particular.

It’s a Sin isn’t a documentary and art is subjective. But the characters Davies created and the choices they make can have a very real impact on an audience who may know little about HIV/AIDS history. As well-intentioned as it may be — and it does scratch a certain itch for those of us looking to hold up a candle and have a good cry — its faults are too glaring to be overcome.

The series opens in 1981 and follows a collection of young gay men and their gal pal through the early 1990s. It’s hardly a spoiler to say that some of them die and trust me when I tell you that it is not pretty.

Any gay man of a certain age will respond viscerally to the emotional triggers in It’s a Sin. Simply depict a tray of cold food left uncaringly outside a room in an AIDS ward or a young man discovering his first cancerous skin lesion and we collapse into a sea of mournful, familiar tears. Our shared trauma is an old friend.

The lives (and deaths) of Davies’ characters, though, include unsettling and misleading tropes that the LGBTQ community – and those of us living with HIV – could really do without.

The gay characters of Its a Sin have an overriding fixation on sex that becomes more unsettling as the series, and the pandemic, plays on. Certainly, any coming-of-age tale will deal with sexual awakenings — and the 1980s were not a time of great sexual austerity, despite the emergence of AIDS — but It’s a Sinlazily trots out the tired stereotype of the dangerously selfish, promiscuous gay man.

It’s a Sin reduces these men to deviants, grasping tightly to the only thing they valued in life, right up to their last breaths. Their lone female friend is better equipped to control herself, evidently, becoming an AIDS activist while her gay friends dither.

I suppose we are meant to see series creator Davies as terribly bold for unmasking gay men as constitutionally incapable of protecting themselves if it meant changing their sexual behaviors. Except that narrative isn’t true and Davies ignores our heroic history to perpetuate it.

With the introduction of condom use in the mid-1980s, gay men engaged in perhaps the greatest example of group behavioral modification ever seen, using prevention methods we had never considered before while becoming the drivers of massive campaigns of HIV peer support and education.

Davies stubbornly chooses to focus on a main character, Ritchie, who does quite the opposite. And then he ratchets up his mystifying disdain by portraying Ritchie as a suicide bomber trying to take out as many other queers as possible. “I wonder how many I killed?” Ritchie ponders while exalting his sexual exploits.

There’s more, including an absolutely mortifying speech in which the supposedly enlightened female activist blames the AIDS death of a friend on homophobia in society (um, okay) and then turns her blame to her dead friend’s emotionally reserved mother. To her face. While she is grieving. The day after her son dies. I don’t know what psychology book produced this Blame the Mother angle but here’s betting it was a first edition copy from 1953.

Our female activist goes on to say (she has a lot to say because the gay characters are frozen into inaction, dead, or completely lack self-determination) that her dead friend, who continued having sex after learning he was HIV positive, was “ashamed of himself… and then he killed people!”

Give me a minute to breathe through this one. Okay. I’m better.

The ignorant notion of people living with HIV roaming the countryside looking for victims to murder is the reason unjust HIV criminalization persists. Right now, thousands of people are serving prison sentences for no other crime than “sex while HIV positive.” In many cases, defendants used protection or had no HIV viral load and did not transmit the virus to anyone. Still, many people living with HIV have been prosecuted and sentenced to decades in prison.

None of this keeps It’s a Sin from targeting nearly every character with blame (and its crushing counterweight, shame) for maximum emotional damage. We know this tactic well in the real world, even if it’s a terribly useless weapon. While we engage in blaming others, the virus plods along, doing what viruses do.

In the end, It’s a Sin blames everything but HIV itself. Meanwhile, the virus just keeps right on replicating, right now just as it did then, utterly unconcerned with the judgments of humankind.

The House will vote on LGBTQ civil rights protections next week