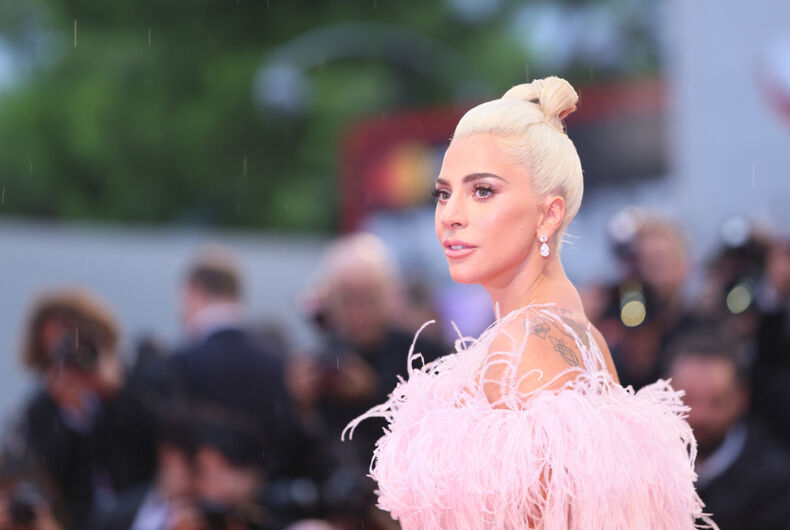 Lady Gaga walks the red carpet ahead of the 'A Star Is Born' screening during the 75th Venice Film Festival at Sala Grande on August 31, 2018 in Venice, Italy.Photo: Shutterstock

A “family size” package of Oreo cookies typically sells for $4 to $5 at the grocery store, but one version of Oreo cookies is selling for $15 on Amazon and up to $199.95 on eBay. Multiple packs are currently running up to $500.

Why the mark-up? These are Lady Gaga Oreos, designed to please her hungry little (cookie) monsters.

More specifically, they are “Lady Gaga Limited Edition Chromatica” Oreos, created in honor of the out entertainer’s pandemic-delayed Chromatica album from last year. Instead of black and white colors, the cookie is made of two pink wafers with green crème filling, packaged in a shiny wrapper.

In case you’ve been under a rock the last hundred-plus years, Oreos are a “sandwich” cookie introduced on March 6, 1912, consisting of two wafers with a sweet crème filling. It’s the best-selling cookie brand in the United States, sold here by the Nabisco division of Mondelēz International.

In this rendition of the American classic cookies, the packages come in different Chromatica-themed designs, with three embossed, Chromatica-related symbols. They taste like the Golden Oreos, although some say they detect the green dye in the filling. Others have said they taste a hint of meat, possibly in tribute to the raw beef meat dress that Gaga wore at the 2010 MTV Video Music Awards.

Gaga’s Oreos have another twist: They have a QR code on the package that customers can scan to hear “musical messages of kindness” from Gaga herself, such as: “I’d share my cookies with you”, “Inside we are really made the same”, “Kindness rules all” and “Keep looking for Wonderland.”

Some packages tout a contest that offers a chance to win a “meet and greet” with Gaga, which “may be virtual.”

The connection to Gaga (aka Stefani Joanne Angelina Germanotta), in addition to the limited edition label, has people hoarding these cookies and putting them on eBay for much more than they cost at the supermarket. In certain areas they’re hard to find, making her cookie monsters want them even more.

This is where the internet, eager for any crumbs from Gaga, does its thing.

On Reddit, some users just want to know what the fuss is all about.

“[Is] Gaga the next Oreo spokeswoman?” suggests GaleZepher.

“I really just don’t know what to do with her anymore,” sighs BlackJesus420.

Others focus on the money angle and Gaga’s built-in fan base.

“You already know someone is going to keep a moldy, unopened stale package of these for like 30 years to make a quick buck down the line,” concurs ChandelierwAtermelon on Reddit.

When fans combine the cookie with another item, they can post messages such as this one from SilverMind9: “Going to eat this in my jockstrap.”

“She knows the gays will eat up whatever content she give us,” says Redditor OgianttoadO.

“Abandoning my gluten free diet to eat these,” confesses lifeislife3.

“Somebody out there’s gonna pull a Vince McMahon and eat an entire box at once for their weekly cheat meal,” predicts 2RINITY.

But by far the most vocal commenters on the internet are the dozens of YouTubers who have posted reviews of the cookies and weighed in on the cultural significance of a world that contains Lady Gaga Oreos.

People such as Leeko Rae, a social influencer from California who appears in and out of drag for an 11-minute review, have a lot to say about Gaga’s cookies.

“If you would have told me a full year ago that Chromatica was going to be one performance and an Oreo release, I would have called you a bitter Madonna fan, but a full year later, here we are.” Leeko says, stressing he has nothing against the cookies themselves. “I mean, if you can find them, good for you. I don’t think this is something that you have to like run out to the store to go get.”

As he takes a bite, he adds, “it’s cute though. This is nice. You just put them on your little bookshelf with your Chromatica vinyl and jockstrap and turn the party. The Oreos taste great, and I guess that’s all that matters at the end of the day, right?”

Most online commenters seem happy for Gaga and her Chromatica tie-ins. Many say they’re likely to try her cookies before they disappear — and judging by the buzz they’re getting, it’s doubtful this will be the last of the performer-cookie collaborations.

After all, if Lady Gaga Oreos can cause such a commotion, can Adele Thin Mints or Orville Peck Twizzlers be far behind?