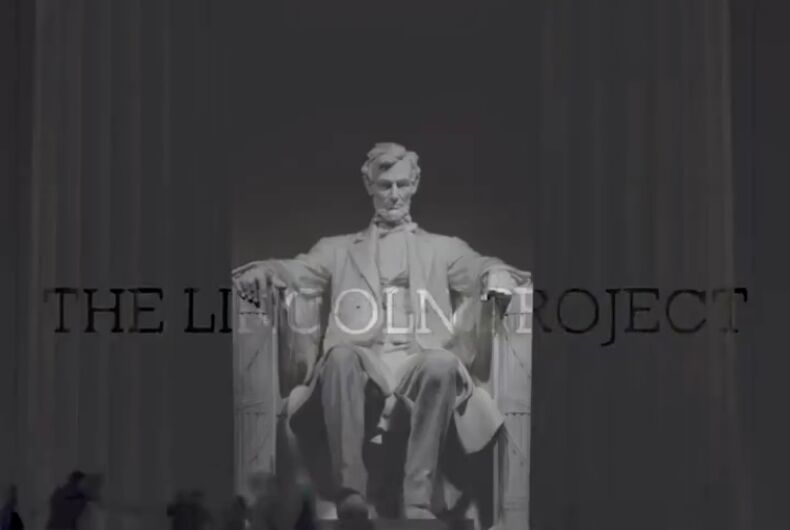 Throughout the last election cycle, the Lincoln Project did a great job of getting under Donald Trump’s skin. The conservative PAC, started by a cadre of never-Trump conservatives, ran a series of commercials that both slammed and ridiculed Trump.

The ads often went viral, although their popularity with political junkies may have outstripped their effectiveness for swaying voters. With Trump’s defeat, they could afford to take a victory lap — but now, much like its main nemesis, the Lincoln Project is in a downward spiral. The multiple scandals around the group echo Trump’s: sexual harassment, grifting and personal attacks on Twitter.

The main (but not only) scandal the group is dealing with is the accusation that one of their founders, John Weaver, regularly harassed and solicited young men, including at least one at just 14 years old. After the New York Times reported that 21 men said Weaver harassed them, even more have emerged to corroborate a pattern of sexual predation.

“We were talking about the Lincoln Project, and maybe getting me involved, and of course I think that’s awesome. I’m like, ‘Oh, yeah, that would be great!’” one Lincoln Project intern told New York Magazine. “Then he asked me: ‘When’s the last time you jacked off?’”

Weaver’s story has all the hallmarks of a classic #MeToo episode. As a well-connected political consultant, Weaver, who ran John McCain’s 2008 presidential campaign, was in a position of power over his victims. Fearful of losing their jobs, many tried to pass it off.

Some warned other young men to keep clear of him. The Lincoln Project, though, apparently looked the other way.

Last June, the group’s leadership was informed in writing and in phone calls of at least 10 cases of sexual harassment by Weaver. Instead of being fired, in August Weaver took a leave of absence for “health reasons.”

When the news of Weaver’s behavior finally broke, the Lincoln Project was unsparing in its attacks on their former colleague. The group said that it was “shocked” by the accusations.

Steve Schmidt, another Lincoln Project founder, said that there was “chatter” last year about Weaver, but no hint of impropriety. In light of the news that the group was repeatedly told about Weaver’s alleged harassment, that’s strained credulity.

Moreover, Weaver’s predilection for young men wasn’t exactly a surprise to those in the political realm. Ryan Girdusky, the right-wing journalist who first reported about the harassment, said it was the “worst-kept secret.” Indeed, rumors that Weaver made a pass at a male aide were circulating as early as 1988.

Weaver went full-on Kevin Spacey in responding to the accusations, declaring himself to be a gay man, who has a wife and two children.

But one scandal isn’t enough for the Lincoln Project. It has two others on its hands.

One has to do with how it spent the $90 million it raised. Less than a third of the money was spent directly on purchasing ads. The rest went to production costs, overhead, and what the Associated Press called “exorbitant consulting fees collected by members of the group.” Exactly how much they each took home is unclear, because the group hasn’t been transparent about it.

Indeed, after being called out for the shady practice, the Lincoln Project came up with a response that would make Trump proud: they would open their books for an audit “after the Trump campaign and all affiliated Super PACS do so.”

In yet another self-inflicted wound, the group is involved in a dispute with another founder, Jennifer Horn, who left the group. The Lincoln Project tweeted a series of DM from Horn’s account without her consent, a potential violation of federal law.

Horn, an out lesbian, had said that the group was aware of the allegations against Weaver. The Lincoln Project countered by revealing that Horn was pressuring the group to give her a $250,000 bonus and a $40, 000 a month consulting contract.

Just because Democrats shared a common enemy with the Lincoln Project founders doesn’t make the conservatives heroes. Rick Wilson worked for Rudy Giuliani and Dick Cheney. As a staffer in the Bush White House, Schmidt (who has a lesbian sister) helped put John Roberts and Samuel Alito on the Supreme Court.

The FBI is now looking further into the Weaver allegations. Schmidt is now out of a job, having resigned from the Lincoln Project yesterday. A number of other staffers have quit as well, and money for the group is drying up as donors flee.

Unfortunately for the Lincoln Project, Trump may have the last laugh after all.

Is the hype over Lady Gaga’s limited edition Oreos worth it? The internet decides.