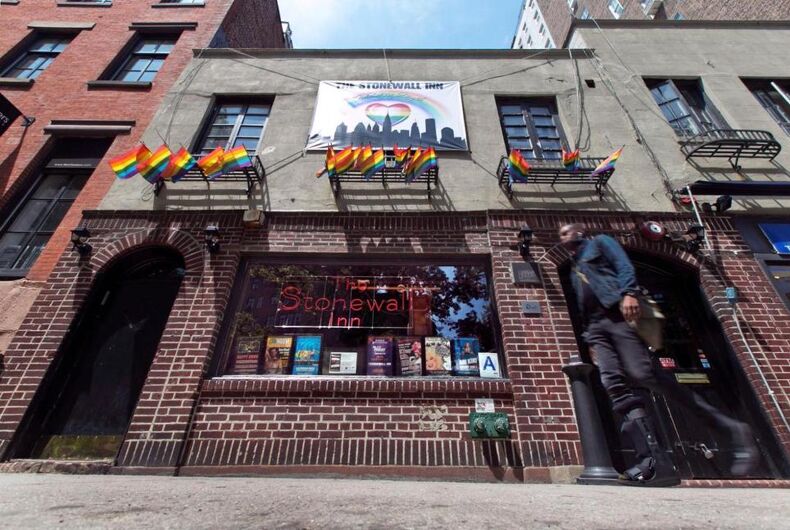 The National Park Service (NPS) has announced its intention to open a nearly 3,700-square-foot LGBTQ historic center next door to New York City’s Stonewall Inn in 2024. The Stonewall National Monument Visitor Center (SNMVC) will be the first LGBTQ visitor center within the NPS’ system of parks and monuments — and it’s being sponsored by some of the best known queer entertainers and allied companies in the nation.

The center pledges to provide an “immersive experience” by hosting tours, exhibits, and lectures on LGBTQ culture and history. The center will also serve as an office for park rangers overseeing the eight-acre Stonewall Inn national monument which includes the bar, Christopher Park, and the surrounding streets involved in the 1969 Stonewall Uprising. The uprising marked the start of the modern-day LGBTQ rights movement.

Ann Marie Gothard, a board member of non-profit LGBTQ cultural advocacy group Pride Live’s board of directors, told NBC News that the center seeks to “motivate the next generation of leaders” by capturing “the essence” of the era in which the uprising occurred.

“If you’ve ever gone down and kind of just observed tourists visiting Stonewall Inn, you’ll see that individuals of a certain age, because it’s a bar, are not allowed to go in,” Gothard said. “So we really want to create a space that’s welcoming for all, whether you represent the gay community or you’re an ally.”

In a statement, Pride Live wrote, “The SNMVC will serve as a beacon for generations to come, providing the unique opportunity to visit the very site where history was made and where the fight for LGBTQ+ equality visibly shifted with new waves of activism.”

U.S. Senator Chuck Schumer said, “The new Stonewall National Monument Visitor Center will serve as an important memorial for the Stonewall Uprising, an iconic and pivotal moment in the essential effort to fully realize America’s founding ideal that we are all created equal,” adding, “As a proud parent of an LGBTQ+ person, I won’t stop fighting against the unprecedented and unjust discrimination the LGBTQ+ community continues to face today.”

The groundbreaking ceremony will be live-streamed at YouTube.com/c/pridelive at 10:30 a.m. eastern standard time.

Pride In Pictures: In memory of Uncle Ron