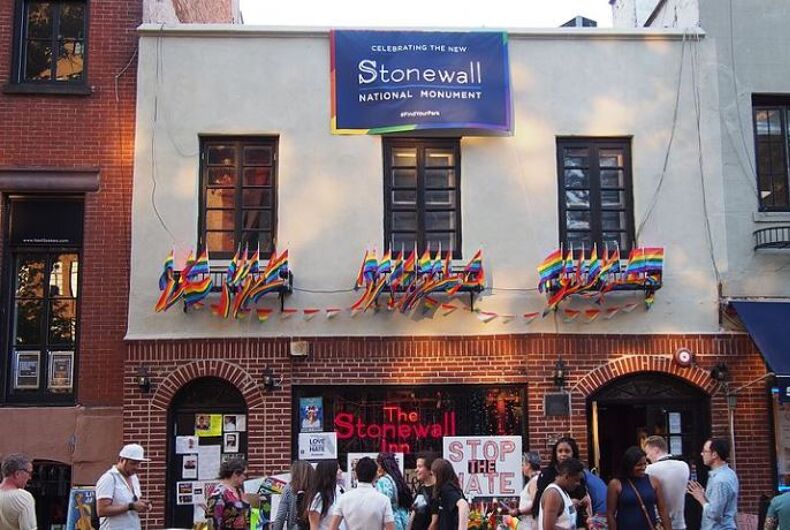 The Biden administration is allowing a plan to move forward for raising a Pride Flag and installing a permanent flag pole in Christopher Park, right across from Stonewall Inn and on federal property encompassed by the Stonewall National Monument.

Under the Trump administration, activists weren’t able to raise a flag pole or Pride flag despite repeated requests with the National Park Service (NPS) that were ultimately not accepted.

Gay City News reports that after years of disputing whether the proposed placement of the flagpole was federal land or not, the Biden administration and Secretary of the Interior Deb Haaland has received the proposal and is allowing the plan to move forward.

“This new flagpole will be permanently located front and center in the beautiful gardens inside Christopher Park,” NPS regional director Gay Vietzke said in a letter to Michael Petrelis, an activist organizing for the flagpole’s placement for years.

“I’m ecstatic that the rainbow flag will fly 24/7 on federal property that is part of the Stonewall National Monument,” Petrelis said about the news. “I was happy that the Rainbow Flag was flying on the Greenwich Village flagpole… but it was not federal property, and that was my ultimate goal.”

In 2019, it was revealed that the Trump administration chose not to lay claim to public land operated by NPS, which prevented activists from moving forward with raising a Pride flag on in 2017.

A short 2017 email in the 992-page email dump from then-assistant deputy secretary at the Department of the Interior Todd Willens read, “Can you please get details from NPS and report back?”

Willens ordered the flag to be removed that year, five days before a ceremony to honor the flag. After further emails, NPS officials determined that the flag pole was not located on federal property and was therefore a gift to New York City.

According to a 2015 land survey, the tiny, triangular Christopher Park is the only part of the much larger national monument that belongs to the federal government. The flag pole is located just outside of the park.

“The first thing that stood out was the absence of substantive information about what the controversy was about,” Petrelis told E&E News at the time. His emails are part of the email cache when he was requesting information about the flag.

“It was clear to me as longtime government transparency advocate that these were professional bureaucrats who knew not to memorialize in writing their substantive discussions.”

One official in the emails actually said as much. “Please keep in mind that this exchange could be subject to a FOIA request in the future,” wrote Philadelphia regional communications chief John Warren in an email.

New York activist and organizer Ken Kidd said that he had positive dealings with New York NPS officials, until federal officials in D.C. got involved.

“The feds were washing their hands of the whole project — it was crazy town; it was shocking,” he said.

“The communication just changed completely and dramatically,” he said. “There was a little bit of radio silence, and then, as the emails will attest, the message changed, and then suddenly the flagpole wasn’t part of the federal envelope.”

LGBTQ people need to wash our hands of Kyrsten Sinema. She doesn’t deserve our support.