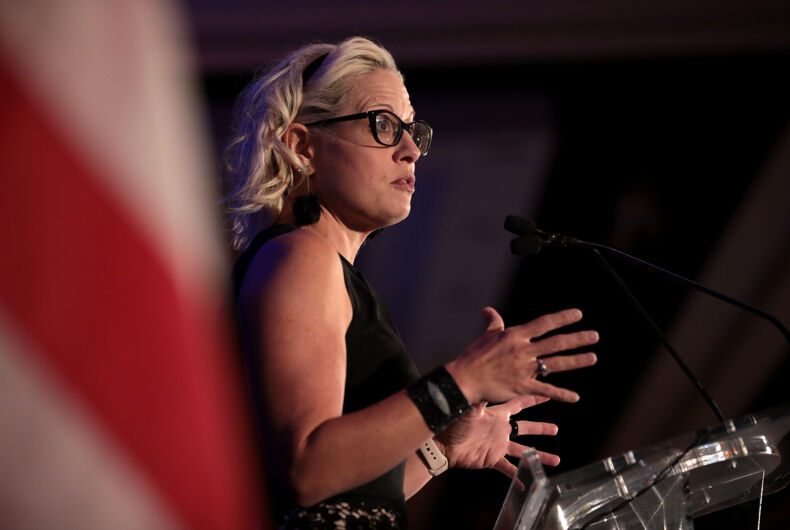 Kyrsten Sinema’s election to the Senate in 2018, which made her the first out bisexual Senator, was a milestone. Sinema seemed like someone guaranteed to advance progressive causes. After all, she began her career as a Green Party activist and proclaimed that LGBTQ rights were a priority for her.

Since then, Sinema has revealed herself to be a politician with no fixed principles and a captive of special interest money, someone who prefers display over delivery and a willingness to abandon her constituents, especially the LGBTQ community. On top of everything else, her posturing promises to tank President Biden’s agenda and thus ensure the return of Republicans to power not only in Congress but in the White House.

Sinema tries to style herself as a successor to fellow Arizonan John McCain. Unlike McCain, Sinema has demonstrated neither personal courage nor the willingness to do the hard work of governing. All she wants is to steal the attention from everyone else.

The showdown over President Biden’s legislative agenda has shown how hollow a politician Sinema is. As one of two Senators who is holding the agenda hostage, Sinema is relishing the media limelight.

The media mistakenly characterizes Sinema as a moderate. That implies that she actually has a political point of view. In fact, she’s an egotist. She has no principle beyond making herself the center of attention.

For one thing, Sinema refuses to say what she wants. Like a toddler who craves attention by shouting “No” at everybody, Sinema won’t even tell the President what would satisfy her. She just won’t sign onto the current legislative package. You can’t even say she’s bargaining in bad faith, because she’s not bargaining at all.

Compare Sinema to her fellow obstructionist, Sen. Joe Manchin (D-WV). Manchin at least has started talking about a number he could live with.

Manchin is a Democrat in West Virginia, a state that voted for Donald Trump by 39 percentage points. West Virginia is now so comfortably Republican that it’s safe to say that Manchin is about the only Democrat who could win office. It makes political sense for Manchin to portray himself as a moderate.

By contrast, Arizona is not nearly as conservative. Perhaps because she won election by just two percentage points, Sinema thinks that she managed to beat the odds in a largely Republican state.

If so, she’s wrong. Democrats have been making gains in Arizona. Joe Biden won the state last year. Her Senate colleague, Mark Kelly (D-AZ), ran against the same candidate as Sinema — Martha McSally — and won by the same margin as Sinema, even though last year was a much tougher political environment for Democrats.

The reality is that if Sinema thinks she can ensure re-election by courting Republicans, she’s a lot less politically savvy then she thinks herself to be. For one thing, that’s not the political direction where Arizona is heading. For another, in a highly polarized political environment, Republicans aren’t going to cross party lines.

Consider this anecdote from a recent New York Times story about Sinema. “I appreciate that she’s not way left-leaning like the rest of them,” Pat Odell, a retired court clerk and conservative, told the paper. But when asked if she would vote for Sinema, Odell answered, probably not.

Meanwhile, Sinema is infuriating the Democratic base that she should be placating. The Arizona Democratic party overwhelmingly passed a resolution condemning Sinema for her obstinacy. One third of Democrats in a recent poll said that they had an unfavorable view of her.

Meanwhile, no one is happier with Sinema than the far right and special interests. Sinema has been praised by the likes of anti-LGBTQ former Senator Rick Santorum for tanking filibuster reform. While other Democrats try to figure out how to tackle financial inequity, Sinema is raking in big bucks from pharmaceutical companies and other business groups who want to block Biden’s agenda.

And why shouldn’t Republicans and the far right be happy with Sinema? She helped to sink the Equality Act by refusing to sign onto filibuster reform, thereby betraying the LGBTQ community she claims to support.

While her re-election is still three years away, it’s time for the LGBTQ community to cancel Sinema. She doesn’t deserve our money or our support. Her antics may earn her a primary challenge in 2024.

That’s where the LGBTQ dollars and energy should go. We may have to put up with Sinema’s antics for three more years, but we shouldn’t for one more day beyond.