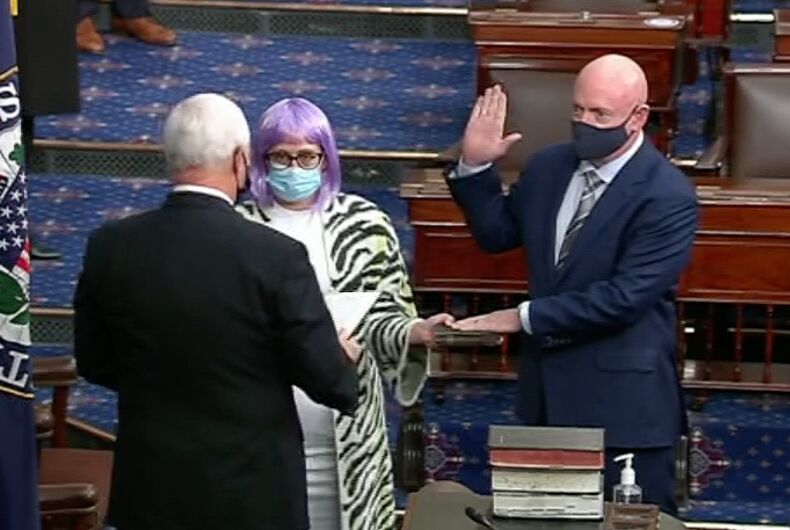 The official scientific name for that look is “stink eye.”

Sinema quickly started trending on Twitter with users giving her props for her fashion and feisty attitude. The senator has been wearing brightly colored wigs since the start of the pandemic to demonstrate ways Americans can still look good while avoiding getting haircuts and staying home.

“Kyrsten Sinema is truly an icon,” one user wrote. “I know we’re supposed to be talking about Mark Kelly but he didn’t show up in a purple wig today, did he?”

Kelly won the special election against appointed Sen. Martha McSally (R) who was chosen to fill John McCain’s (R) seat after his death. McSally ran against Sinema for her seat, but lost. The historically red state now has two Democratic senators and broke for President-elect Joe Biden as well.

Sinema and McSally, who fought a tough and bitter battle, reportedly met on the floor of the Senate shortly after they were both sworn in. McSally approached Sinema and told her, “I know we had a tough race but I do hope we can be friends now that we’re both serving.”

According to reports, Sinema blatantly ignored McSally and instead turned to a colleague and said, “She won’t be here long.”

Expert level trolling by Sen. Kyrsten Sinema. Mother will not be pleased.

lol her look at pence

Two things that I needed to see today, @CaptMarkKelly being sworn in as Senator, and @kyrstensinema with lavender hair, holding a bible. https://t.co/HPq8sygLKT