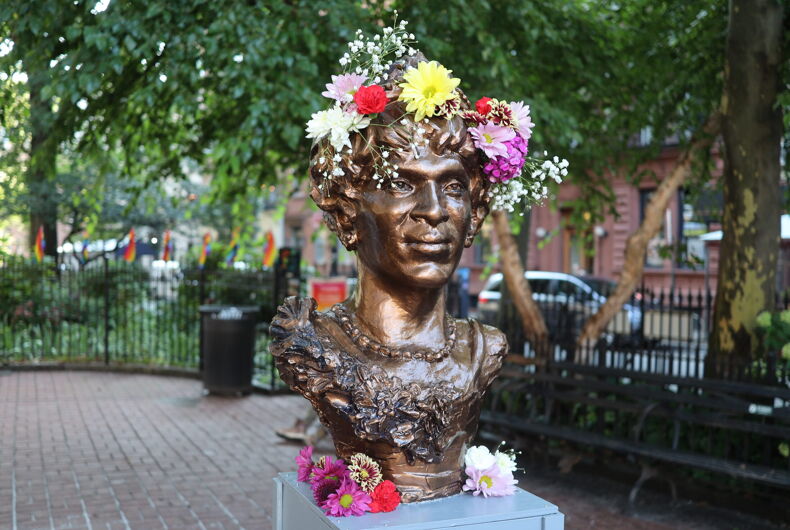 A bust of transgender activist Marsha P. Johnson has been erected in Christopher Park in New York City. It is the first monument of a transgender person in the city park system.

The park is near the Stonewall Inn and features a separate statue, Gay Liberation, commissioned in 1980 and installed in 1992. The piece features statues of two men and two women that are painted white.

Related: Trump administration gives away public land so they won’t have to fly a rainbow flag for LGBTQ pride

Gay Liberation has been critiqued for focusing on white cisgender people and leaving out the transgender and people of color who were part of the Stonewall riots in 1969. The Stonewall Inn, the gay bar at the heart of the riot, has been designated a National Monument.

In 2015, the statues were vandalized by activists who painted them brown and adorned them with bras and wigs. A sign was placed next to the statues that read, “Black Latina trans women led the riots. Stop the whitewashing.”

When artist George Sagal was commissioned to create the monument by wealthy arts patron Peter Putnam in 1980, his instructions were that it “had to be loving and caring, and show the affection that is the hallmark of gay people… and it had to have equal representation of men and women.”

“At a time when we are taking down statues, I think it is just as important to collectively consider what is put up in public spaces, the process that is used to erect statues and reimagine the function of monumental work,” sculptor Jesse Pollotta told LGBTQ Nation.

The bust includes a quote from Johnson at the bottom: “History isn’t something you look back at and say it was inevitable, it happens because people make decisions that are sometimes very impulsive and of the moment, but those moments are cumulative realities.”

It describes her simply as a “lover of poetry, flowers, space, and the color purple.”

The New York Park System has a shockingly low number of monuments and statues of women. Out of over 800 monuments, only seven are statues of historically important women.

“We cannot stay idle and wait for the city to build statues for us. We must create representation by and for our own communities,” sculpture coordinator Eli Erlick added.

Johnson was a well-known figure in New York City’s LGBT and HIV/AIDS communities, an organizer and activist whose contributions to social change persisted long after the Stonewall riots subsided.

She and friend and fellow activist Sylvia Rivera founded Street Transvestite Action Revolutionaries to provide resources, care, and advocacy for homeless queer youth. The two are credited with encouraging the development of a trans community, separate from the larger LGB community, yet with attention to intersectional issues like racial justice, homelessness, and criminal justice reform.

Her contributions were cut short when Johnson’s body was found in the Hudson River on July 6, 1992. The death was quickly ruled a suicide but a number of friends blasted that finding, especially considering a head wound had Johnson suffered, a report she had been harassed near the river, and a witness who claimed to overhear a man bragging about murdering “a drag queen named Marsha.”

The city has halted construction of the Marsha P. Johnson Park in Williamsburg after the civil rights icon’s family and Black trans activists objected to the park’s design and lack of community input.

The park has been widely panned as ugly and in direct opposition to Johnson’s legacy of community organizing.

The New York City Parks department did not respond to a request for comment by time of publication.