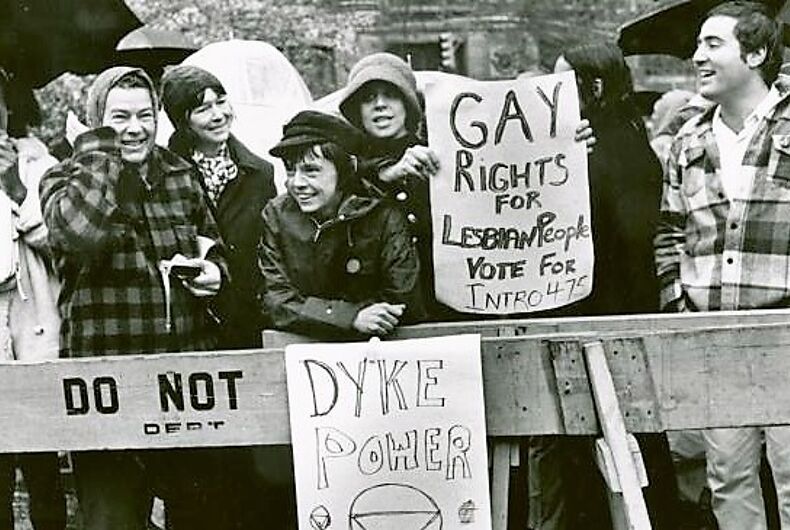 Stonewall instigators Silvia Rivera (far left) and Marsha Johnson (with umbrella) protesting for 475 – a comprehensive LGBT rights bill – which followed the Stonewall Riot in 1971 and 1972.

Almost 23 years to the day after helping to lead the seminal uprising against police at the Stonewall Inn, Marsha P. Johnson was reported missing.

The trans woman was a well-known figure in New York City’s LGBT and HIV/AIDS communities, an organizer and activist whose contributions to social change persisted long after the Stonewall riots subsided.

She and friend and fellow activist Sylvia Rivera founded Street Transvestite Action Revolutionaries to provide resources, care and advocacy for homeless queer youth. The two are credited with encouraging the development of a trans community, separate from the larger LGB community, yet with attention to intersectional issues like racial justice, homelessness and criminal justice reform.

Her contributions were cut short when Johnson’s body was found in the Hudson River on July 6, 1992. The death was quickly ruled a suicide but a number of friends blasted that finding, especially considering a head wound Johnson suffered, a report she had been harassed near the river and a witness who claimed overhearing a man bragging about murdering “a drag queen named Marsha.”

Twenty-five years later, a new documentary is seeking justice for Johnson. The Death and Life of Marsha P. Johnson, directed by David France, who was nominated for an Academy Award for his 2012 AIDS documentary How to Survive a Plague, follows the Anti-Violence Project’s work to gain traction for a new investigation into Johnson’s death. With archival footage, the documentary brings to life one of the trans community’s earliest pioneers, using Johnson’s life and death to speak to systemic issues like ongoing violence against trans women of color.

France spoke to LGBTQ Nation about the historic yet timely film. The documentary premiers on Netflix on October 6.

JC: What brought you to this story?

DF: I knew Marsha personally from her role in gay life in the ’70s, ’80s and ’90s. She was widely known and widely celebrated, in part because she was a central figure in the Stonewall uprising. But the exact details of what she had done and what she had accomplished politically were largely lost to time. I knew enough about her that I knew that a story that excavated her political contributions would be really important.

JC: How did you get connected to the Anti-Violence Project’s Victoria Cruz?

DF: Marsha died in 1992 and it was a terrible year for crime in New York. I was reporting for the Village Voice at the time and covering this wild uptick in anti-LGBT crimes. I knew that at the time the police department was not responding adequately to the epidemic, nor were politicians or newspapers, but the Anti-Violence Project — which is a 30-year-old initiative to advocate for LGBT crime victims — was very aggressively investigating cases in a way to force police to take crimes against us seriously.

So when I began my work on the documentary, I turned back to the Anti-Violence Project to ask if they would go back to this old case with me. They assigned me Victoria Cruz, which was like incredible luck to find somebody who was so gorgeous and compelling to follow. But also somebody who had a great personal connection to the case and to the history of Marsha and Sylvia Rivera.

JC: I understand there were roadblocks throughout the process of getting access to files and records. Do you think that was connected to anti-trans bias?

DF: We went back to the people who were working on the case 25 years ago and their biases from the time seemed to remain fully intact. To them, Marsha was an insignificant victim of crime, a person whose case could be easily dismissed or glossed over. There was no appetite on their part to look back on her case, although they remembered it.

One officer Victoria talked to immediately remembered the name Marsha Johnson and that she was a trans woman found in the river. It’s not that it was a small case in their mind but they treated it as though it was a meaningless case, and continued to. Certainly they didn’t want Victoria stumbling into discovering things they should have discovered or discovering things they knew about and buried.

And that’s why she hit obstacles there. Victoria proves that it was a massive cover-up. And that it was a cover-up of the death of a significant historical figure just adds to the tragedy of it. But hers was one of, I’m sure, scores of cases that year alone that were covered up.

JC: There’s no finite closure on Marsha’s death by the conclusion of the film; was that challenging for you, personally and/or professionally?

DF: It’s frustrating in some regard because everybody deserves to have their killers brought to justice. The bigger question Victoria helps us discover in the course of her research is that the cause of Marsha’s death is much greater than any individual or individuals; she fell victim to systemic prejudice against trans people, especially trans women of color.

Those fundamental problems that existed in 1992 are still with us today and account for year after year of new records of trans women of color being killed and their cases generating too-little public sympathy. I think that her focus on the systems that created the cops that created the cover-up that let the killing go unanswered is the bigger, more important discovery. She does justice for Marsha in that way.

JC: Marsha has been gone for more than 25 years. How did you work to bring her to life, to show modern audiences who she was as a person?

Brooke Shields: Donald Trump came on to me in the creepiest way possible