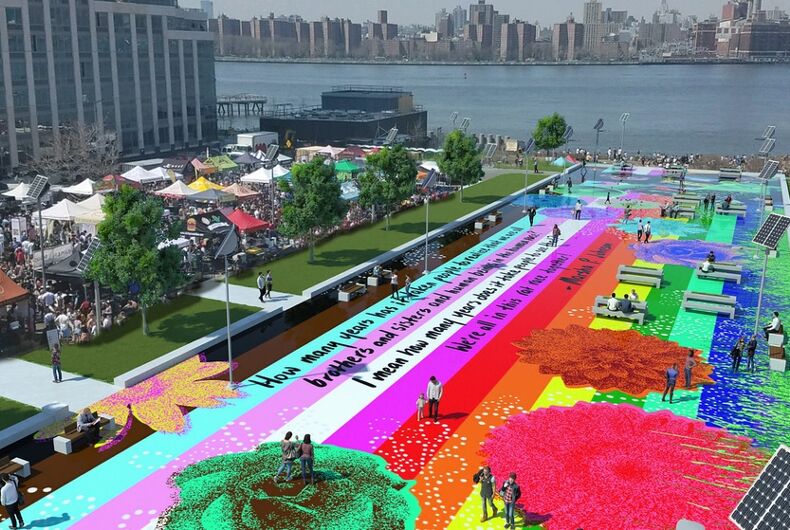 New York has halted construction of the Marsha P. Johnson Park in Williamsburg after the civil rights icon’s family and Black trans activists objected to the park’s design and lack of community input.

The park has been widely panned as ugly and in direct opposition to Johnson’s legacy of community organizing.

Construction was halted after Johnson’s family members denounced the project during a community meeting. They said the state was using Johnson’s legacy as a prop to revamp the area.

Johnson’s cousin, James Carey, said that he was notified the park would be renamed in her honor but added that despite his attempts to be involved in discussions about the park, no one ever returned his multiple emails and phone calls.

“I sent correspondences to the governor personally to let him know that our family as a whole were happy that you’re naming the park in the memory of our family member, however, please when the occasion arises, please include us,” he said. “Not one person — no one — responded, and I find it absurd.”

“I personally feel this was a mass deception campaign and our family was deceived. Moving forward, from this point forward, no one will be trying to exploit my cousin’s name without consulting with my family.”

Transgender activists are also crying foul, saying they were also deliberately kept out of the loop.

Locals are angry that the state closed off half of the area with very little notice before starting to rip out a concrete slab. The slab was to be replaced with a “colorful thermoplastic mural” that has residents dubbing it the “plastic park.”

Johnson’s family said they were also unaware that the local community had issues with the state’s decisions as well since they were locked out of the planning process.

“We were not aware that the community had a disagreement with the park design,” Johnson’s great-niece said at the meeting. “We were somewhat caught out of the loop in that regard. We are very saddened, I would almost say disgusted by the lack of transparency that has taken place.”

“Superstraight” is the newest anti-LGBTQ insult. Here’s what it means.

The question in the eyes of a lonely Mexican ostrich