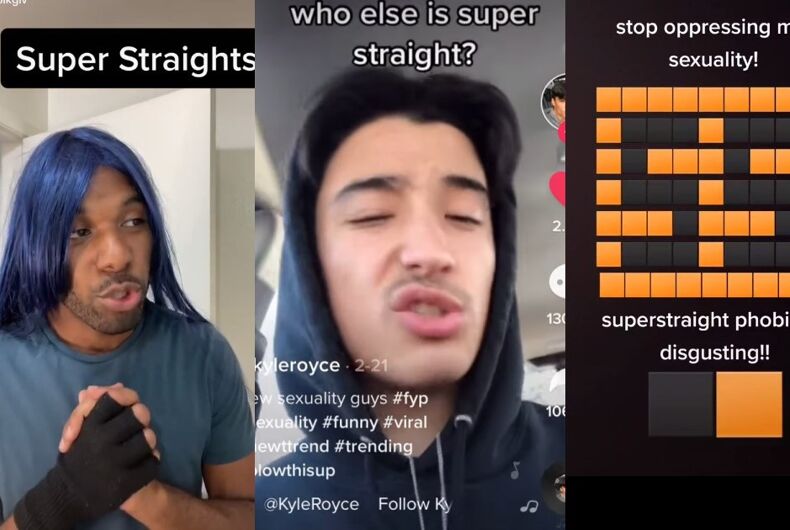 A transphobic and homophobic trend that originated on TikTok is getting a lot of attention on social media: “superstraight.” And it has people defending it, attacking it, and making fun of it.

The idea appears to have originated in a video posted to TikTok last month where user Kyle Royce says that he now identifies as super straight; that is, he is a man who is only attracted to cisgender women.

He made it clear that this is not an actual sexual orientation by describing it as a response to the pressure he says is being put on him to date transgender women and not a deep-seated attraction that has nothing to do with his disrespect for transgender people.

He also did not say who is pressuring him to actually date trans women. Instead, he implies that he has just seen some online comments saying that it’s transphobic to completely exclude trans women from the category of women.

“Yo you guys, I made a new sexuality now, actually. It’s called superstraight, OK,” he says in the video.

“Since straight people or straight men as myself get called transphobic because I wouldn’t date a trans woman,” he explained, “like no, that’s not a real woman to me, ‘No, you’re just transphobic’….”

“So now, I’m superstraight. I only date the opposite gender, women, that are born women. So you can’t say I’m transphobic now because that’s just my sexuality.”

The video was deleted from TikTok but someone uploaded it to YouTube.

The idea of “superstraight” was widely panned by LGBTQ people as both transphobic and homophobic. It was called transphobic because it implies that not dating trans people makes a person more straight – as if trans people aren’t really their gender – and because it’s basically cisgender people being exclusionary and making a big deal of their lack of desire to date a class of people when no one asked them in the first place.

And it has been called homophobic because it belittles and mocks sexual minorities, implying that sexual identity is the same as whatever dating preferences a person may have.

Moveover, many people making videos or memes in support of superstraight imply that they face similar discrimination to gay people, even though they can’t really name what oppression they’ve faced outside of vague references to internet commenters calling them transphobic.

While silly, the superstraight concept caught on.

The #superstraight sexual orientation wouldn’t exist if y’all just fucking LET people be attracted to who they are attracted to and not making them feel guilty about it. You did this to yourselves. pic.twitter.com/uyR6TtSdjv

But they also got criticized on the platform popular with Gen Z.

♬ That one part in Baby Blue – Zach

Over the weekend, Twitter took notice and started supporting or mocking superstraight as well, usually with memes because it’s Twitter.

Bisexuals and Transgender People support each other, and HATE #superstraight ! pic.twitter.com/SHwlSbaBv1

Y’all are super crazy #superstraight
You all just want an excuse to be transphobic and it disgusts me so much trans women are women
💜🏳️‍⚧️❤️ pic.twitter.com/PyRBRyD4Y5

If the connection to transphobia and homophobia weren’t clear enough, some popular superstraight memes are about threatening violence against transgender people or claiming that heterosexuality is what “nature intended.”

#superstraight But where are those good old-fashioned values.. on which we used to rely?! pic.twitter.com/G0XUUlZ4sP

Far-right movements – including Nazis – picked up on it and spread it to 4chan. The Nazis also played up the fact that superstraight can be abbreviated as “SS,” a Nazi paramilitary organization.

This took 5 minutes on Google. It's a far right troll campaign from 4Chan to get you to associate with Nazism.

Leslie Jordan tells Meghan Markle “The gays have got your back”