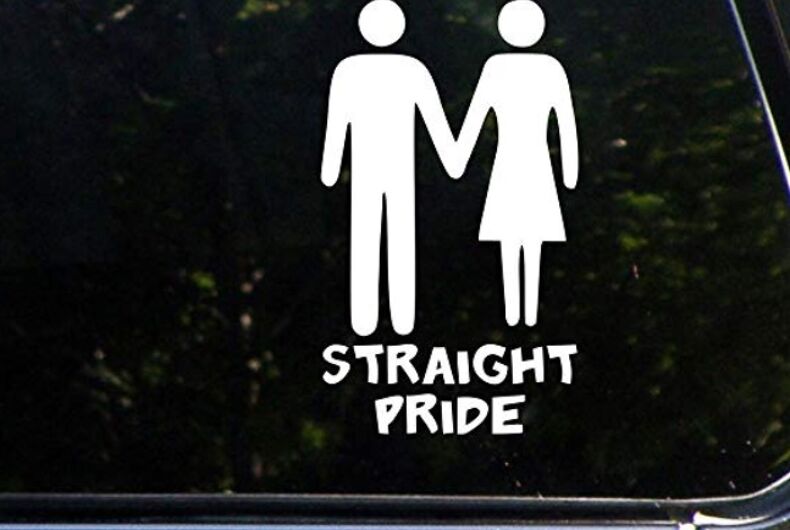 Straight Pride decal that was available on AmazonPhoto: Amazon

Straight Pride organizer Mark Sahady and participant Suzanne Ianni of Massachusetts were arrested by the FBI earlier today in connection to the attempted armed insurrection at the Capitol earlier this month after they were outed by the group behind Straight Pride.

Sahady and Ianni are each being charged with knowingly entering or remaining in any restricted building or grounds without lawful authority and disorderly conduct on Capitol grounds.

Related: Dallas had a “straight pride” parade & only four people showed up. One of them attacked the others.

According to court documents reviewed by MassLive.com, the FBI found out about the pair through social media posts from the organization “Super Happy Fun America,” which organized Straight Pride in Boston in 2019 and whose motto is “It’s Great to be Straight.” Sahady is the group’s vice president.

The group posted pictures to Twitter of Sahady and Ianna with the caption “Bus 1 of 11 coming to Washington DC. See you there!” The FBI believes that Ianna helped organize the buses, which brought around 300 people from Massachusetts to D.C.

Only about 100 to 200 attendees ended up going to Straight Pride in Boston in 2019, where they were vastly outnumbered by counterprotesters.

The event was arranged to celebrate “the diverse history, culture, and contributions of the straight community,” but the event was tied to white supremacy through Sahady’s ties to the far-right group called Resist Marxism.

Since there apparently not enough straight people in America, the 2019 parade honored a British gay man, far-right troll Milo Yiannopoulos, who was the parade’s “mascot and Grand Marshall.”

The president of Super Happy Fun America John Hugo said, “We are not anti-gay, we are pro-straight.”

The group also requested to fly a “Straight Pride” flag on the city’s flag pole. The request was denied.

Randy Rainbow says goodbye to Donald Trump. He saved the best for last.