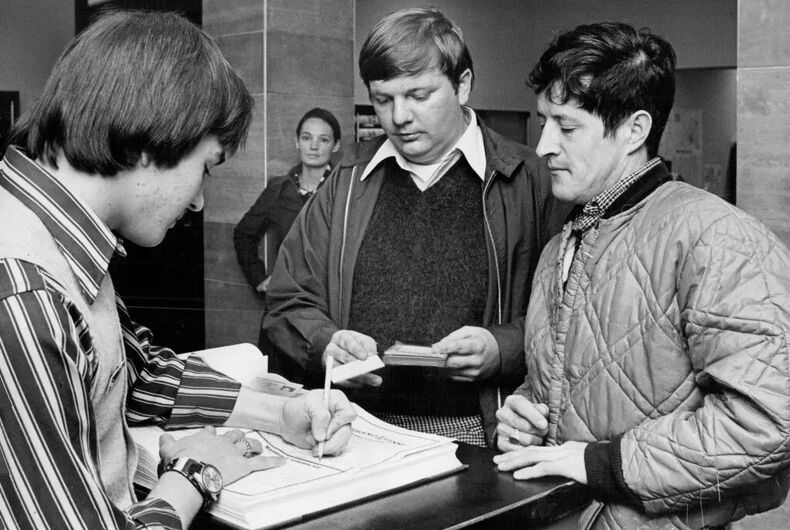 Clela Rorex, the former clerk in Boulder County, Colorado who issued the nation’s first same-sex marriage licenses in 1975, has died. She was 78.

Rorex had been elected to the post in November 1974 just months before David McCord and David Zamora came to her seeking a marriage license.

Rorex consulted William C. Wise, the county’s assistant district attorney, who said that same-sex marriage did not appear to be specifically prohibited by state law.

“There is no statutory law prohibiting the issuance of a license, probably because the situation was simply not contemplated in the past by our legislature,” he told her.

Clela issued the license to the couple the following day, March 27, 1975. In early April she granted a marriage license to two women, again making news.

“Colorado has become a mini-Nevada for homosexual couples,” The New York Times said at the time.

Rorex granted half a dozen licenses to same-sex couples before the state attorney general, J.D. MacFarlane, contradicted the assistant DA with an opinion that marriages had to be between a man and a woman.

None of the licenses Rorex issued to same-sex couples has ever been invalidated.

While Rorex’s actions made her a hero in the gay-rights movement, she was also a target.

“I was just so inundated with mostly hate mail during that time period,” she told The Associated Press in 2004. “It was really incredible the letters I got.”

“It was so (long) before its time, no one else could even imagine doing it,” said Glenda Russell, a retired psychologist, writer, and LGBTQ community historian. “Nationally at the time, most people didn’t take it too seriously because they didn’t worry about it happening again, but in Boulder, the reaction was forceful and mean-spirited. She got hit with all the homophobia and heterosexism that the LGBTQ community was facing.”

“I just was this young woman in this place at this point in time,” Rorex told NPR in 2015, “and thank goodness I made that decision because it would be so hard for me to look myself in the mirror today if I had not made the decision then.”

Her certification “was a pivotal moment in the long struggle for marriage equality that led to Obergefell v. Hodges in 2015, which legalized marriage equality nationally,” wrote out-Governor Jared Polis (D-CO) in tribute to Rorex.

“So many families, including First Gentleman Marlon Reis and I, are grateful for the visionary leadership of Clela Rorex.”

Rorex was already making news before she issued the historic licenses. She was president of the Boulder chapter of NOW, the National Organization for Women, and her distinctive license plate, reading “MS1”, earned notice. On March 14, 1975, The Greeley Daily Tribune in Colorado ran a photograph of the back of her car, which also sported a “Yes! Equal Rights” bumper sticker.

“Boulder County Clerk Clela Rorex leaves no doubt about her sentiments on the women’s movement,” the caption read.

In 1977, Rorex resigned as Boulder County Clerk and Recorder. She raised two sons, obtained two Masters degrees, and finished her career working as a legal administrator for the Native American Rights Fund.

“To me, it was pretty clear,” she said. “It’s not against the law. They’re asking for this right. Who am I to say otherwise? I issued a license. That was how it started.”

India’s drag scene is nothing like America’s. Here’s how it’s different & why