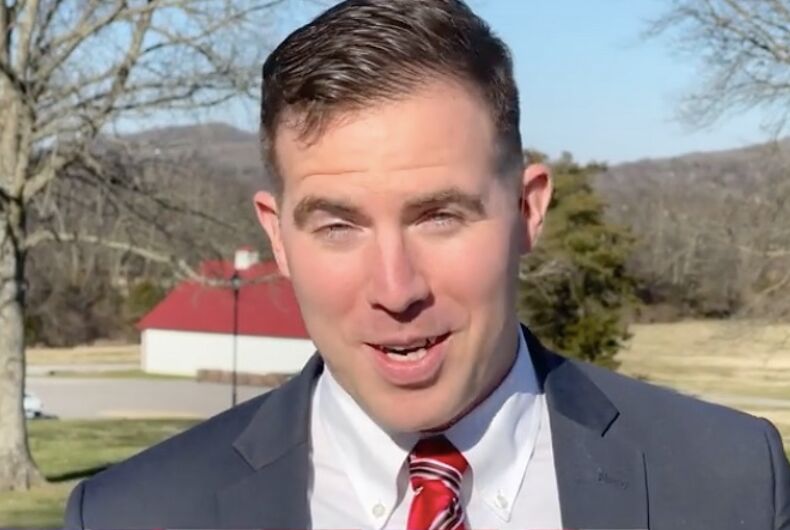 Tennessee Christian conservative candidate Stewart Parks is trying to stand out amongst his nine U.S. House competitors by pledging to ban Pride Month and deliver a bunch of other far-right campaign promises.

“If you elect me, this month will be the last National Gay Pride month ever celebrated,” he wrote in a public Facebook post published June 1. “We need to elect people into US congress that will stand up and say Homosexuality and Transgenderism are evil.”

Related: “Christofascists” scream obscenities at kids outside of Pride month event to prove Jesus loves them

He then promised to overturn the 2015 Supreme Court ruling that legalized same-sex marriage and reinstate the so-called Defense of Marriage Act which enshrined anti-gay discrimination nationwide, adding, “Two men and two women cannot come close to a unified man and woman married.”

“Sexual Liberation is NOT western values,” his post continued. “LGBQT+ movement is communist as they seek to destabilize our country with their divisive rhetoric and destroy families. Transgenderism and Pedophilia are now rampant in our society. We have to ban it asap and safeguard our children against it. We have to get Transgenderism out of our schools.”

“When I win this election everyone will know their gender again,” he concluded. “The populace will know Men cannot get pregnant and can actively define a woman.”

Parks is one of 10 Republican candidates running for Tennessee’s 5th congressional district. As of March 31, he has raised a whopping $624 for his campaign, according to Ballotpedia. The district he’s running in had a Democratic representative until it was recently gerrymandered to be far more right-leaning. The state’s primary election will be held on August 4, 2022.

While Parks’ rant against “transgenderism and pedophilia” may sound bonkers, they’re increasingly mainstream positions in the Republican Party. Republican officials nationwide seek to ban gender-affirming medical care for trans youth and accuse supporters of LGBTQ content in classrooms of being pedophilic child rapists.

Parks also believes former President Donald Trump’s baseless claims that the 2020 election was “stolen,” has called the COVID-19 vaccine a “harmful” “placebo,” opposes government efforts to protect the environment, supports criminalizing abortion as murder, opposes racial justice protests kneeling during the National Anthem, has pushed conspiracy theories about Black Lives Matter supporters being “terrorists,” opposes increasing taxes on the millionaires and billionaires and he also condemns the removal of confederate monuments and flags as “Marxist,” a catch-all conservative word for any actions they oppose.

Often, far-right conservatives who have no hope of winning office run in order to gain more political influence and notoriety. But his positions on LGBTQ issues have a welcome home in his home state’s Republican-led legislature.

Tennessee has recently passed a ban on trans athletes playing in college sports. The state legislature is considering a bill that would ban LGBTQ people from mentioning their identities in classrooms. A 2021 state law requiring trans-inclusive bathrooms to include warning signs was recently blasted as blatantly unconstitutional by a judge who placed an injunction against it.