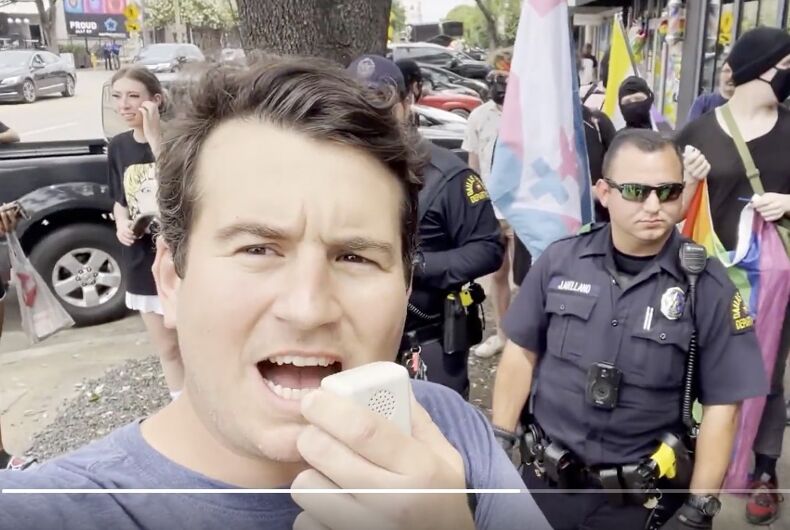 A group of “Christofascists” gathered outside of a Dallas gay bar over the weekend to scream obscenities at children and their parents at a Pride Month event. The family-friendly event was a drag show that allowed the children to walk the runway.

The activists waved flags with religious symbols and shot videos of their antics while children covered their ears and cowered in fear from the adults screaming about “groomers” and child abuse.

“I only have one question, why do you want to put an axe wound in between your son’s legs?’ one protester shouted through a bullhorn.

“We’ve got kids here, please go away,” a parent responded.

“That’s the point,” the man responded.

Police forced the group away from the entrance, but some of the group had purchased tickets to the event and went inside to film the festivities while trying to interrupt the performances and intimidate the parents and kids. The religious extremists posted videos of the kids on social media without permission from the parents.

The group complained about kids being allowed in the bar, but the event was held outside of normal business hours and was family-friendly.

Outside of the venue, protestors chased attendees and performers while assaulting counter-protesters.

Rightwing comedian Alex Stein helped to organize and document the confrontation by the radical right. He proudly posted videos of the “Christians” denigrating children and hurling slurs at LGBTQ people.

“Imagine if conservatives got as upset over kids getting massacred in school as they do over a single drag show brunch in Dallas,” Mark Kelly Stan quipped on Twitter after footage of the despicable protest went viral.

These people try to hide behind their masks and assault people…we must stand up for what is right and expose these sick pyschopaths pic.twitter.com/56Yg9T6Auy

Asking the drag queen how she feels for exploiting little children? pic.twitter.com/Jlho6qL1e2

In the first weekend of LGBTQ pride month, far-right media and protesters swarmed around a Dallas gay bar that held a daytime event where drag performers danced for parents and kids https://t.co/GEsOasOS9M

7 year olds tipping drag queens and hanging out in a 21 and up bar & the Dallas Police dept is letting it happen….why not enforce the law? @DallasPD @Johnson4Dallas pic.twitter.com/aQCWqwlI2L

How long will I be in jail if I leave my show to find these protesters on the strip and beat their ass. Asking for a friend