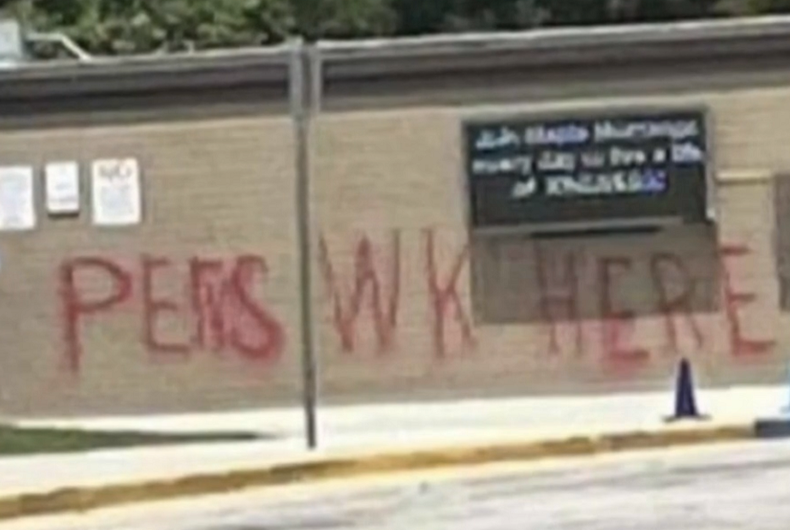 An elementary school in Ventura County, California was vandalized early last Friday morning with graffiti reading “Pervs Work Here.” The message has been widely interpreted within Maple Elementary School’s community as a response to a teacher’s affirmation of a transgender student’s new name and pronouns.

According to CBS News Los Angeles, the teacher explained the student’s identity to her class back in January, reading them a children’s book about a transgender boy.

“She just said that the student went by one name and the teacher said now we are going to refer to the student by this name, and she said we support all the kids in this classroom and that was it and it wasn’t a big deal,” recalls Lauren Najjarpour, whose daughter is in the class.

The teacher received support from the Conejo Valley Unified School Board. “This is a place of learning, and every student has a fundamental right to be safe in a place of learning and everyone, regardless of their age, has the right name and claim their identity,” member Lauren Gill told CBS News.

Parents and school district officials have since rallied around the teacher and student. “It was so misinformed, the entire article,” Najjarpour said.

“In the Conejo Valley Unified School District we proudly serve ALL students and even more proudly affirm to be a place where ALL students belong,” read a statement from the districts superintendent Dr. Mark McLaughlin.

The incident comes as a wave of anti-LGBTQ sentiment seems to be sweeping the nations, focused largely on young trans people. In March, Florida Gov. Ron DeSantis (R) signed the state’s “Don’t Say Gay” bill into law, prohibiting any mention of “sexual orientation or gender identity” in younger grades.

That same month, Texas Gov. Greg Abbott (R) directed the state Department of Family and Protective Services to investigate gender-affirming care for minors as child abuse. In total, 320 anti-LGBTQ bills have been introduced in state houses this year according the Human Rights Campaign, compared to just 41 in 2018.

In his Pride Month address earlier this week, President Joe Biden noted that the onslaught of anti-LGBTQ legislation “has been especially difficult on LGBTQ youth, 45 percent of whom seriously considered attempting suicide in the last year.”

Meanwhile, Republicans and conservative commentators have been busy resurrecting hateful tropes about LGBTQ people as abusers and pedophiles. “Groomers” has become a popular label on the right, referring to the ways that predators gain access to potential victims, coerce them to agree to the abuse, and to reduce the risk of getting caught.

Conservative politicians and pundits insist that by affirming LGBTQ children’s identities, parents and teachers are in fact “grooming” them. The graffiti at Maple Elementary School would seem to echo those sentiments.

The UK plans to send LGBTQ asylum seekers to Rwanda to await their fate. They won’t be safe there