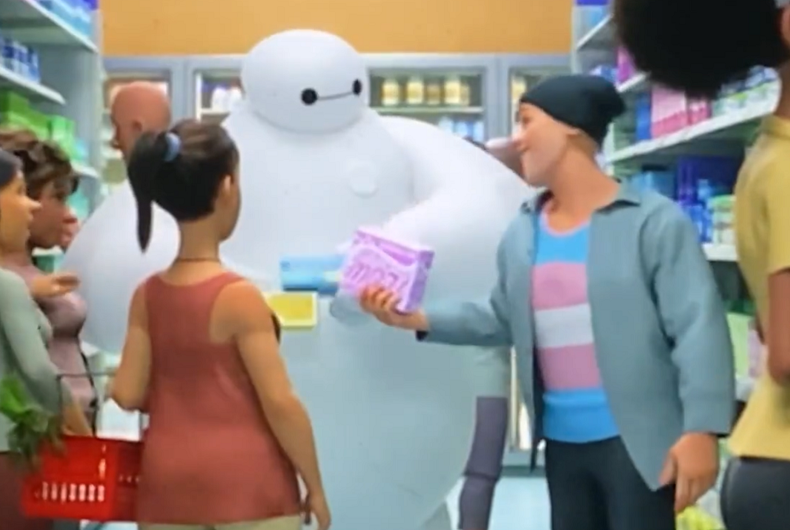 Baymax talking to people at the grocery store.Photo: Screenshot

Conservatives are freaking out because a clip from a streamed Disney show includes a transgender flag and people discussing menstruation products, and they’re getting brutally mocked online.

Anti-LGBTQ activist Christopher Rufo – who helped drive Florida’s attempts to punish the Disney Corporation after the company stated its opposition to the Don’t Say Gay law – said that he got leaked video from the Disney series Baymax! that “promotes the transgender flag and the idea that men can have periods to children as young as two years old.”

“It’s all part of Disney’s plan to re-engineer the discourse around kids and sexuality,” he claimed.

The clip shows the helpful health robot Baymax asking a woman for help picking tampons at a grocery store. Several other people – including a dad and a person wearing a transgender Pride flag T-shirt – chimed in with suggestions.

Many supported Rufo’s stance and went further, suggesting that no one should be talking about menstruation if children might be watching.

It’s just so weird. Put aside the trans thing for a minute. I don’t need Disney to jump start the period conversation with my children. Can’t my spouse and I have these conversations when we feel they are ready?

I have a 3 yr old and a 5 yr old. They would be confused and wondering what's in the box.

I have 4 kids, ages 8-15, who would watch this and it would make them all uncomfortable. What is the purpose?

I was hoping this was a joke.
Kids do not want to talk about periods!! Argh!!!

But other people mocked the idea that period products are inherently sexual and that minors should not know about them.

What does having a period have to do with sexuality? It’s a basic bodily function

You lot really are offended by absolutely nothing. Truly and overwhelmingly pathetic

How do you take yourself seriously?

…because a large part of the planet is made up women? And they should know things like this to understand a large part of humanity?
Y'know, learning basic modern biology???

Just a few seconds of someone with a transgender pride shirt grinds your balls into powder somehow, also yeah, kids do need to learn about health products for when they grow up to teenagers

An 8 yo would only find that uncomfortable if a parent put it in their head that it's wrong beforehand. 🙄

Okay, and? Some kids get their period at age 8. Half of them will have it by 14. Are you saying that makes those 8 year olds sexual?

op needs to shut up because this clip makes me so happy. There’s no talking around the topic and using substitute words, there’s a dad who’s unashamed to help his daughter, the trans character is comfortable, everyone is supportive. More of this please https://t.co/UgYZYGmSY3

Baymax is a character from the Disney movie Big Hero 6 and the series Baymax! premieres tonight on Disney+.

How to know if you are non-binary