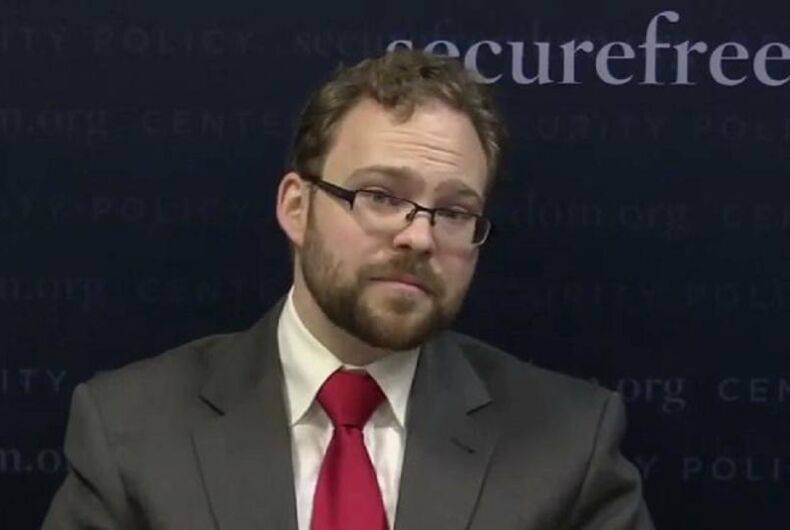 As Fox News continues to attack Disney for voicing opposition to Florida’s “Don’t Say Gay” law, one editor is not even trying to veil his anti-LGBTQ motivations behind supporting the law.

Tyler O’Neil, who has promoted conversion therapy, has been publishing articles on Fox News lambasting Disney and claiming the left’s push for inclusivity will scar children for life.

One of his articles, titled “Teacher running for Congress warns of psychological damage Disney’s LGBT agenda may do to kids,” features a teacher who claims the left has waged “‘a war on childhood innocence'” and is pushing “sexuality-focused teaching and even, in the worst instances, pornographic material” to elementary school students.

Another one, titled “Disney employee issues dire warning about the economic consequences of the new ‘leftward lurch,'” features an employee running for Congress threatening that if Disney continues to espouse liberal views, the company will be punished by “the tyrannical rule of the mayor of Orange County.”

During his time working for right-wing media company PJ Media, O’Neil repeatedly expressed anti-LGBTQ and anti-trans views, writing, for example, that the Bible “clearly conflicts with the LGBT orthodoxy that Biden and his fellow Democrats want to enforce on us.”

In a 2018 column, he even advocated conversion therapy to turn gay people straight.

“Four men — Michael, Nathan, Dennis, and John — all rediscovered their masculinity through therapy,” he wrote in the piece about the discredited and harmful practice. “As a result, their unwanted same-sex attraction weakened or dissipated.”

O’Neil even claimed that “regions of the brain connected to sexual preference” can “change,” a pseudoscientific claim contradicted by mainstream psychological organizations like the American Psychological Association.

And he has continued to spread these messages.

"It is profoundly unethical to intervene in the normal physical development of a child as part of ‘affirming’ a ‘gender identity’ at odds with bodily sex," Anderson added. "Governments should prohibit this misuse of medical technology and protect children from these harms."

"The Left is looking more and more absurd when they come out and say Lia Thomas has no advantage," Bremer said. "You can’t deny that a biological male has an advantage, especially post-pubescent."

Last week, Tucker Carlson ranted against Disney’s vows to bring more queer characters to its stories and claimed the Don’t Say Gay law bans teachers from talking to small children “about their own genitals or encouraging them to change their gender.” He also said Disney’s promise to be more inclusive was proof it wanted to “indoctrinate children without their parents’ knowledge.” He accused Disney of being “creepy as hell” and having a “sexual agenda for six-year-old children.”

Laura Ingraham also railed against Disney. “Why not just name the roller coaster Sex Mountain?” she said, implying that talking about LGBTQ people in schools is the same as having obscene conversations with children.