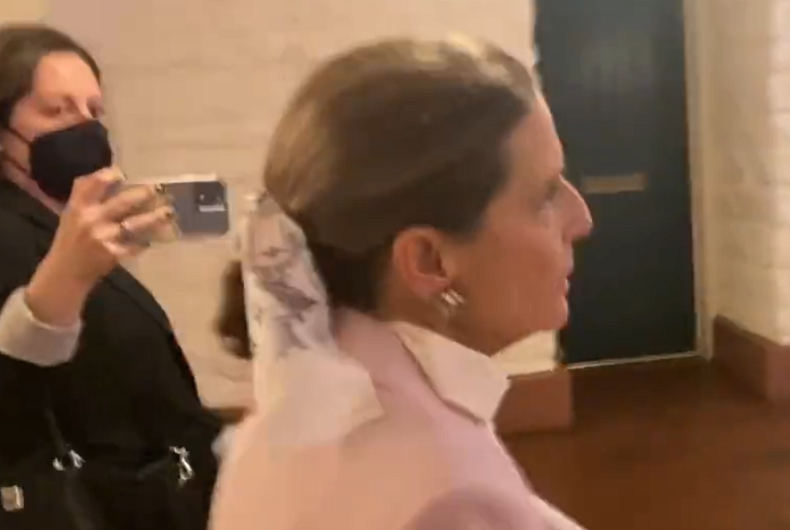 Ohio Rep. Jean Schmidt (R) ran away from a journalist and claimed he was harassing her when asked about the Don’t Say Gay bill she introduced in the Ohio legislature.

Schmidt used to be a member of Congress and earned the moniker “Mean Jean” when she said in 2005 that opponents of the Iraq War – and particularly former Marine and Rep. Jack Murtha (D-PA) – were “cowards” who want to “cut and run.” She later withdrew her remarks and apologized to Murtha.

She lost her U. S. House seat to a primary challenger in 2012, ran for the Ohio General Assembly in 2020, and just introduced a copycat version of Florida’s Don’t Say Gay law in the Ohio legislature this past week, H.B. 616.

And now it’s Schmidt who’s running away… from a journalist.

“Please don’t harass me,” Schmidt said to Spectrum News 1 reporter Josh Rultenberg as he tried to ask her about her Don’t Say Gay bill.

“Why do you feel the need to introduce this here in Ohio?” Rultenberg can be heard asking as Schmidt walks faster without answering.

On Twitter, Rultenberg said that he had already tried calling Schmidt’s office and emailed her requesting an interview, but he didn’t get a response.

For transparency: Rep. Schmidt’s office did not return my calls or email requests for interviews. She also darted out of a committee hearing early and refused to talk with reporters before I started rolling. She also refused to make herself available later. @SpectrumNews1OH

LGBTQ organizations have already sued Florida over its law, saying that it’s so vague that it effectively bans any mention of LGBTQ people, which violates their rights. Supporters of the bill are just calling anyone who opposes the bill a pedophile.

H.B. 616 also bans education on “divisive” topics, which include teaching materials that promote “diversity, equity, and inclusion learning outcomes” and “critical race theory,” a term that has become a catch-all on the right for any education about the history of racism in the U.S.