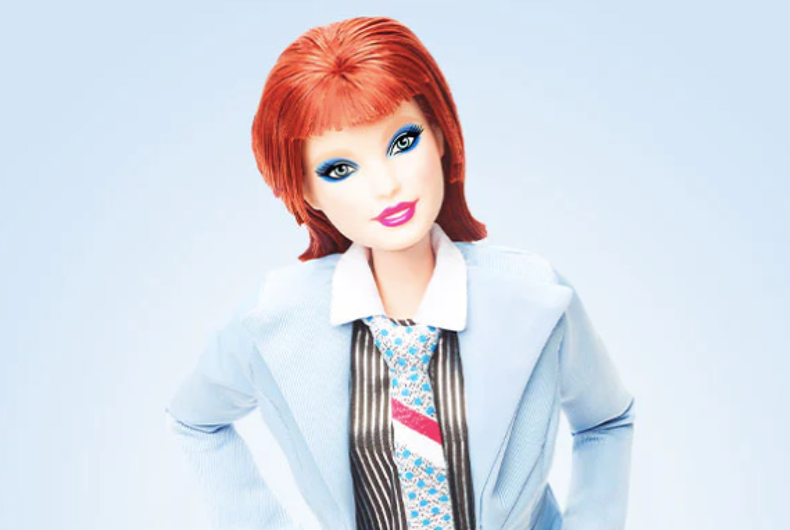 The $50 doll appears in the iconic baby blue suit that Bowie wore in the 1973 “Life on Mars?” video. The look includes a foil-printed pin-stripe shirt; his standout red, white, and blue tie; and brown classic platform shoes. The doll’s hairstyle and bold blue eyeshadow are inspired by Bowie’s ‘70s glam era look.

However, the doll isn’t actually supposed to be David Bowie, but rather Barbie in a Bowie-inspired look.

The doll’s designer Linda Kyaw-Merschon said, “It’s a tribute to Bowie – his outfit, his makeup, his features – to emulate his essence and make sure it looked like Barbie, but as Bowie.”

The doll is actually the second Bowie Barbie doll. The first doll, released in 2019, was styled after Bowie’s iconic 1973 Ziggy Stardust look. It featured a shiny red and blue jumpsuit, knee-high red boots, a shock of bright red hair, black nail polish, and a gold sun disk on the doll’s forehead.

While some Bowie fans may not recognize his album Hunky Dory by name, it features some of his most popular songs, including “Changes”, “Life on Mars”, “Queen Bitch”, and Oh, You Pretty Thing!” The pop album marked a sinificant departure from his three previous folk albums.

In 2020, Barbie released an Elton John doll that was so popular that it sold out immediately. In 2019, Barbie released a doll fashioned after champion lesbian athlete Billie Jean King as part of its Inspiring Women Series. Earlier this year, Mattel released its first-ever transgender Barbie doll, styled after award-winning actress Laverne Cox.

All about the demisexual flag