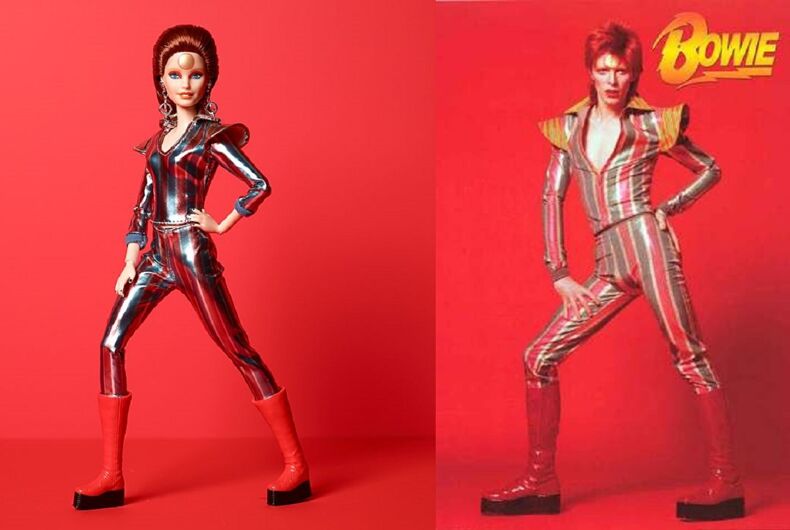 Honoring the 50th anniversary of the release of David Bowie’s iconic “Space Oddity” track, Mattel is releasing a doll featuring the genderfluid look of the singer titular character, Ziggy Stardust.

The fashion doll comes in an outfit  based on Bowie’s iconic 1973 Ziggy Stardust look, featuring a miniature reproduction of a bodysuit by Freddie Burretti and boots by Kansai Yamamoto. The outfit is topped off by a shock of bright red hair.

The doll even features black nail polish and a gold sun disk on Barbie’s forehead, completing the Ziggy look.

Related: The Little Mermaid was originally a ‘love letter’ to the author’s male crush

Don’t expect this Barbie to be under every kid’s Christmas tree this December however, as it’s clearly designed for the collector’s market. The doll, which carries a $50 price tag, will only be available in limited quantities, and comes with a stand and certificate of authenticity.

It will also be boxed in package featuring a collage of photos from Bowie’s 1970s heights.

David Bowie passed away in 2016, and remained influential over his five-decade long career. His time in his androgynous alien rock star persona, Ziggy Stardust, is nevertheless cited as a high point in his career. “Space Oddity” came out prior to this time in his career, but was re-released during the height of Bowie’s “Ziggy” era, and remains one of the most iconic songs of his career.

Barbie dolls were the brain child of Ruth Handler, the president of Mattel in 1959, and was based on a German adult doll and character, Bild-Lilli. The doll has been both celebrated and reviled over the decades.

The doll has also long had a collector’s market, and Mattel has been happy to oblige. Previous collectors’ variants have included bisexual artist Frida Kahlo and Television star Lucille Ball.

A bisexual man was banned from donating blood. So he donated a kidney instead.