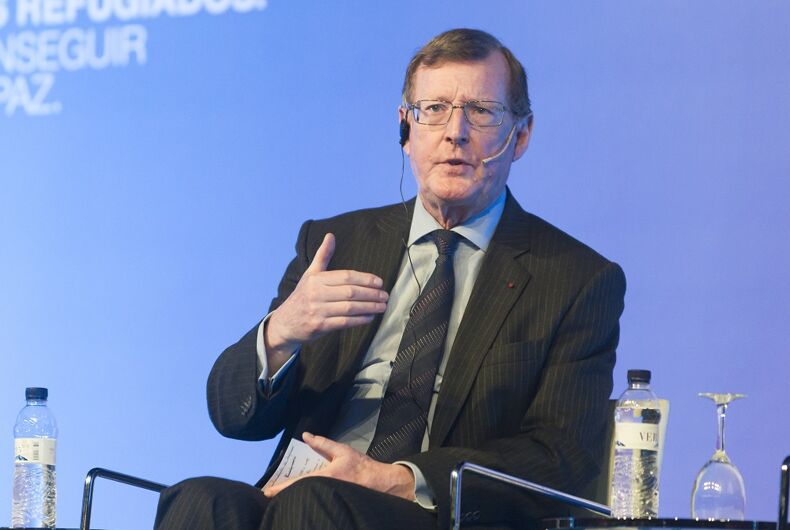 A member of the House of Lords in the UK who previously campaigned against civil unions for same-sex couples said that his daughter is married to another woman.

David Trimble is a big deal in conservative politics in Northern Ireland. From 1995 to 2005, he led the Ulster Unionist Party, and now he’s a Conservative member of the House of Lords.

In 1998, he and John Hume won the Nobel Peace Prize for helping negotiate the Good Friday Agreement, which helped lead to peace in Northern Ireland.

In 2014, marriage equality was legalized in England, Wales, and Scotland, but Northern Ireland still bans it, and abortion is illegal in Northern Ireland except when the life of the mother is at risk.

The House of Commons passed an amendment earlier this week extending marriage equality and abortion access to Northern Ireland by October 21 if the Northern Ireland Assembly, which collapsed in 2017, hasn’t resumed by then.

Trimble spoke on the matter in the House of Lords, referring to marriage equality and abortion as “delicate matters.”

“I have found myself taking a particular position with regard to same-sex marriage, which was forced upon me when my elder daughter got married to her girlfriend,” he said.

“I cannot change that, and I cannot now go around saying that I am opposed to it because I acquiesced to it. There we are.”