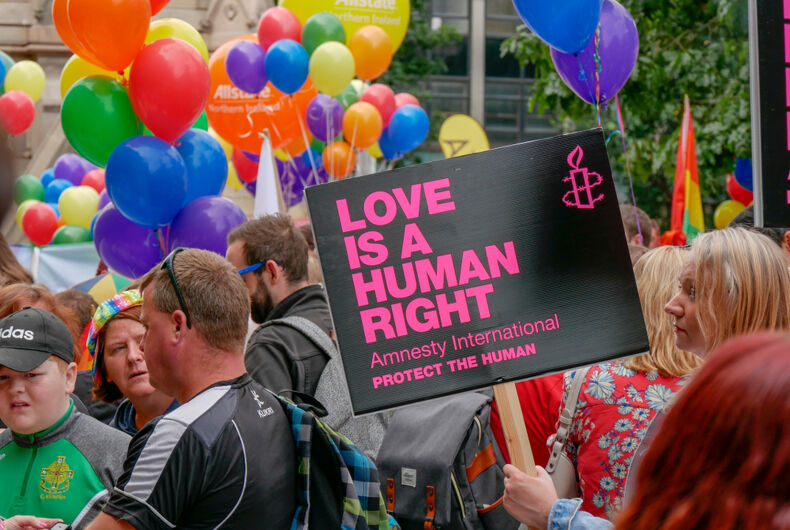 Unlike the rest of the United Kingdom and Ireland, and most of Western Europe, Northern Ireland (the part of Ireland still connected to the UK) does not have marriage equality for its LGBT+ citizens. The reasons for this are long and varied, but essentially Northern Ireland has the responsibility of governing its own laws and legislation on things like human rights, welfare, policing etc.

Much like any US state, it has its own legislative assembly to debate these matters and pass laws on anything that is not a reserved matter (still under the control of the central British government). Northern Ireland’s government, however, has collapsed and cannot move forward on some issues under the circumstances.

Marriage equality is one of these issues that is devolved, and since 2012 there have been no less than five attempts by members of the Northern Ireland Assembly (elected by the people of Northern Ireland similar to State Assembly or Legislature elections) to call for the introduction of equal marriage. All five attempts have fallen before they got off the ground, thanks in part to a legislative quirk known as the Petition of Concern mechanism.

Not happy with the state of play in Northern Ireland, MPs in Westminster have tried a number of times to force the UK government into legislating on this as the Northern Ireland Assembly remains a lame duck. Labour Party MP, Conor McGinn, introduced a piece of legislation in 2018 that would have legalized marriage equality in Northern Ireland over the head of the defunct devolved Assembly here, however this was defeated in the House of Commons.

Today, at long last, the UK government was forced to intervene on an issue that has been outstanding since 2013.

The Secretary of State for Northern Ireland introduced legislation today to allow the talks between the main political parties in Northern Ireland to continue without having to call fresh elections. As is the procedure with bills in the House of Commons, amendments are allowed to be tabled. Conor McGinn MP tabled a rider to the legislation that would see marriage equality brought to Northern Ireland, more than six years after the law was changed in England and Wales, if there is no restored Assembly by October 21.

The amendment passed comfortably in the Commons this evening however it will only become law if there is no progress in the political talks to form a new government between the Democratic Unionist Party (DUP) and Sinn Féin before the end of October.

The Petition of Concern allows any party with over thirty Members of the Legislative Assembly (MLAs) to challenge any vote, motion, amendment or bill by way of a cross-community vote which would only allow it to pass if a majority of both sides of the House vote in favour.

The problem with that is the DUP have had more than thirty MLAs in their ranks since 2007, and the DUP are notorious for their opposition to any progress for LGBT+ people since their inception in 1979. They have vetoed, or voted down any legislative measure for same-sex couples or LGBT progress since they have been in government, so all five attempts to pass marriage equality have been thwarted either by a majority vote or use of the Petition of Concern mechanism.

However, in January of 2017 the power-sharing government in Northern Ireland collapsed due to outstanding issues between the DUP and their government partners, Sinn Fein. Sinn Fein, a Nationalist party who wish to see Ireland reunited, have refused to go back into government with the DUP until these issues are addressed.

One of those issues is marriage equality.

In the subsequent elections in March of 2017, the DUP went under the thirty seat threshold to trigger a Petition of Concern, but with no Assembly sitting there has been no way of MLAs bringing marriage equality legislation to the floor.

For a bit of comparison, this would be like the Illinois House of Representatives being defunct because members from the Democratic Party walked out and refused to participate unless the Republicans acquiesced over certain issues. It’s a bit more complex than that but you get the idea.

For over two years now there has been no government in Northern Ireland due to the collapse of the Assembly and the ongoing political stalemate. Currently the minority government in Westminster, under Theresa May, is currently being propped up by DUP MPs in the House of Commons as she lacks a majority to pass any legislation so there has been no appetite to legislate for marriage equality for Northern Ireland in Westminster so she doesn’t upset the DUP and lose crucial votes.

Same-sex couples in Northern Ireland are able to choose to enter into a civil partnership since 2004, a legal arrangement that provides most of the same rights and recognition of marriage, but cannot get legally married. Same-sex couples in England, Scotland and Wales and the Republic of Ireland all have this right, however.

LGBTQ people and human rights campaigners across Northern Ireland were on tenterhooks waiting for the result of the vote in the House of Commons this evening, however the mood has been jubilant at the news that the measure has passed. It would at long last be a massive step forward for same sex couples and LGBT+ rights in a part of the world where almost all progress for our community has been gained by court action or the intervention of Westminster.

It’s a sad indictment of the state of Northern Irish politics that, in the nearly twenty years since the signing of the Good Friday Agreement and the establishment of power sharing government here, that not a single piece of legislation to improve the quality of life for LGBT+ citizens has been passed.

Today might see that change, and with it comes the hope that the political parties here will accept the outcome and finally deliver real and meaningful change for same sex couples.