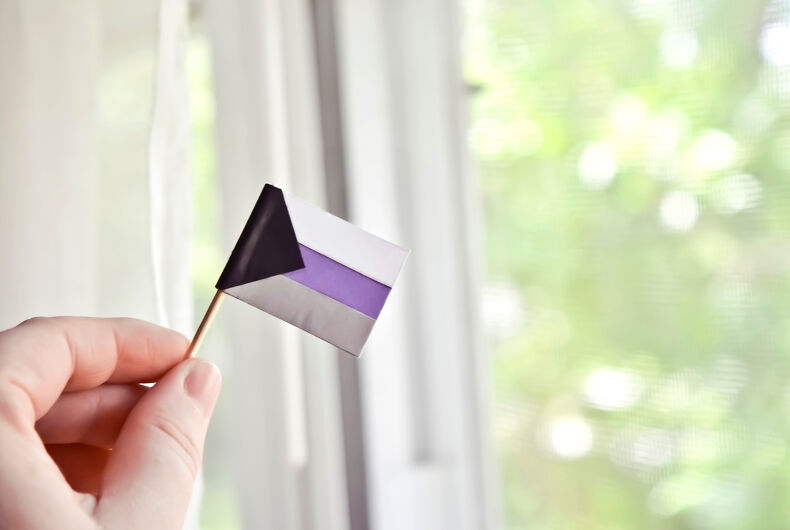 Whether you’ve just recently come to terms with your demisexuality or a friend has come out to you as demisexual, it’s important to learn more about the things that are meaningful and important to the demisexual community.

Here, we briefly discuss the meaning behind the term “demisexual”, as well as examine the elements of the demisexual flag – a symbol that stokes feelings of pride, visibility, and community among demisexuals.

What Does It Mean To Be Demisexual?

According to the Asexual Visibility and Education Network (AVEN), demisexuality is described as “feeling no sexual attraction towards other people unless a strong emotional bond has been established.” The word is a combination of the prefix “demi”-, which means “half” or “partial”, and the word “sexual”.

Demisexual people often identify with the asexuality spectrum (acespec). Like gray-asexuals or graysexuals – people who may experience sexuality infrequently, weakly, or ambiguously – demisexuals identify as being in that “gray area” between asexuality (having no or very little interest in sex) and allosexual (having the capacity for sexual attraction to others regularly).

When dating, demisexual people tend to assess people based on whether they can get emotionally intimate with them rather than looks. In that sense, demisexuals don’t necessarily have a physical type, as emotional intimacy precedes physical intimacy for them.

However, each demisexual person is different. Some demisexuals may simply want to avoid any kind of physical intimacy before they get to know another person, others may feel completely averse to sex if they have not or cannot form that emotional bond.

Breaking Down The Demisexual Pride Flag

The demisexuality flag was created with the asexuality flag as a point of reference. On the left side of the design, there’s a black triangle pointing towards the center. The background consists of three stripes – a white stripe on top, a gray stripe at the bottom, and a thin purple stripe in the center.

Here’s what each element represents:

Pride flags became popular symbols of community and solidarity way back in the 1970s, when Gilbert Baker designed the first rainbow pride flag. This was after San Francisco city Supervisor Harvey Milk requested a symbol that could ignite hope in the gay community.

The pride flag then began to show up at protests and demonstrations as a kind of signal – a visual shorthand for the rallying cry “we’re here, we’re queer, get used to it!” In essence, the pride flag proved to be an effective and easily recognizable symbol of pride, community, and inclusivity.

As the gay liberation movement evolved to include more members of the community – including lesbians, bisexuals, transgender, non-binary people, and intersex people – more groups sought to establish a specific flag that members of their community could wave with pride. Thus, the lesbian, bisexual, and transgender flags were born.

Fast-forward to the 2010s: the age of social media and microblogging platforms like Tumblr, Reddit, and Twitter. On these sites, many young LGBTQ people found refuge and community. It was on these platforms and other similar websites that LGBTQ people discovered obscure terms or even came up with new ones to describe their specific experiences with gender and sexuality. As more and more terms and communities sprouted, so did flags.

The demisexual flag is just as important as any other pride flag out there. It’s a symbol of community and pride. It’s a way to show others “we’re here” – both in the sense of creating a safe space for similar individuals to flock to and in the sense of fighting to be seen in a world that has rendered you invisible.

The demisexual flag is an important representation of the demisexual community. It helps to show that there are people who share similar experiences and feelings, and it allows for people who identify as demisexual to feel more connected to one another.

Related: The asexual community has a racism problem. Let’s talk about it.

Being alive is your number one civic duty. Your mental health is as important as your vote.