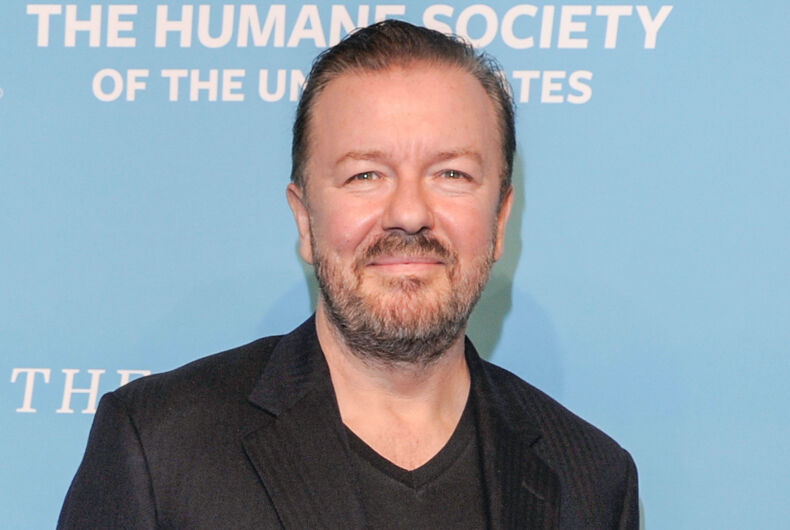 “I love the new women. They’re great, aren’t they? The new ones we’ve been seeing lately. The ones with beards and cocks. They’re as good as gold, I love them,” Gervais says.

He then imitates a conversation between a trans supporter and a cis woman, starting with the supporter saying, “‘[Trans women] are ladies — look at their pronouns! What about this person isn’t a lady?’ ‘Well, his penis.’ ‘Her penis, you f–king bigot!’ ‘What if he rapes me?’ ‘What if she rapes you, you f–king TERF whore?’”

Conservatives have long said that allowing trans women to use bathrooms matching their gender identities will permit cisgender men to enter women’s bathrooms and locker rooms just to sexually assault women and kids. There are no reported incidents of this actually happening.

But nevertheless, Gervais, fellow transphobe J.K. Rowling and countless conservatives have continually repeated this narrative, painting trans people as sexual predators who deserve to be discriminated against, harassed, beaten up and killed. In reality, trans people simply want to pee in peace and be left alone.

Perhaps hoping to avoid his own cancellation, at the end of the routine, Gervais says, “In real life of course I support trans rights. I support all human rights, and trans rights are human rights. Live your best life. Use your preferred pronouns. Be the gender that you feel that you are. But meet me halfway, ladies: Lose the cock. That’s all I’m saying.”

Gervais’ and Chappelle’s specials will continue Netflix’s reputation as a supporter of transphobic comedians.

In his October 2021 stand-up comedy special The Closer, Chappelle announced he is a transgender exclusionary radical feminist (TERF) before launching into a derogatory diatribe about transgender women’s genitals. Netflix’s co-CEO Ted Sarandos refused to remove the special, claiming in a memo that Chappelle’s remarks didn’t cross any lines and that Chappelle was simply too popular to remove.

The month that The Closer was released, Netflix fired B. Pagels-Minor, a Black, pregnant, transgender employee who organized an employee walkout over Chappelle’s transphobic remarks. Despite the employee’s firing, about 30 Netflix employees still staged a walkout at the company’s Hollywood headquarters that same month.

“Netflix has a policy that content ‘designed to incite hate or violence’ is not allowed on their platform, but we all know that anti-LGBTQ content does exactly that. While Netflix is home to some groundbreaking LGBTQ shows, it refuses to enforce its own policy in comedy,” GLAAD’s tweet thread noted.

We watched the Ricky Gervais "comedy" special on Netflix so you don’t have to. It’s full of graphic, dangerous, anti-trans rants masquerading as jokes. He also spouts anti-gay rhetoric & spreads inaccurate information about HIV. 1/4