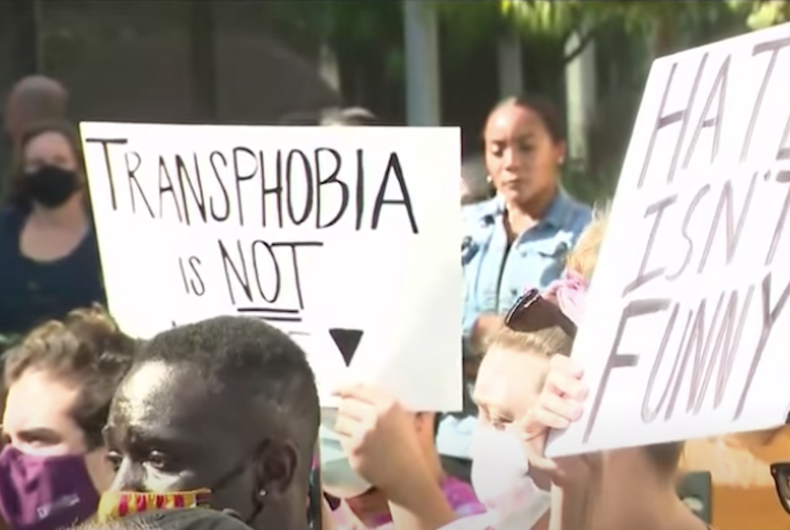 Hundreds joined the protest in support of trans rights and representation. They were met by counter-protestors who identified as “free-speech” advocates and trans-exclusionary radical feminists (TERFs, a term Chappelle describes himself as). A few shoves occurred between the competing demonstrators, but no further physical altercations.

Protestor signs included slogans like “Black Trans Lives Matter” and “Transphobia is not Funny.” Some counter-protestor signs read “Free speech is a right” and “Truth is not transphobic.”

Among the protestors was co-organizer and media personality Ashlee Marie Preston, who has conducted training at Netflix.

“We’re up against the emergence of a hate economy and there is this manipulation of algorithmic science that distorts the way that we perceive ourselves and others,” she said, according to Buzzfeed News.

She said that she and others had asked Chappelle to converse with them about his special, but he declined, The 19th reported. Preston added that she and others don’t want to “cancel” Chappelle, but rather to educate him about the real-world harm that trans people face, especially as 2021 shapes up to be the deadliest year on record for anti-trans murders.

Gabrielle Korn, who heads up Netflix’s LGBTQ+ hub “Most”, also joined the protest.

An employee named Diana, who wanted her last name withheld to avoid retaliation, said “I think our leadership mistook how seriously this content has an impact on people. They’re just talking about making money and making sure we entertain the world and not perhaps thinking about how there are human feelings and lives involved in this and there’s a true impact.”

An estimated 30 employees participated, according to Edge Media. However, most reportedly stayed silent, refusing to talk to media, possibly over the fear of being fired like B. Pagels-Minor. Pagels-Minor is a Black, pregnant trans employee who the company let go last week for allegedly leaking internal documents to the media.

One of the speakers at the walkout rally was Joey Soloway, creator of the groundbreaking Amazon dramedy series Transparent.

“[Netflix recorded Chappelle’s] outrage as comedic humiliation in front of thousands of people, and then broadcasting it to hundreds of millions of people is infinitely amplified gender violence,” Soloway said at the rally. “I want trans representation on the Netflix board, this (expletive) week!”

In a supportive tweet, Dan Levy, the gay actor and creator of the sitcom Schitt’s Creek, wrote, “I stand with every employee at Netflix using their voice to ensure a safe and supportive environment.”

“I’ve seen firsthand how vital television can be when it comes to influencing the cultural conversation,” his tweet continued. “That impact is real and works both ways positively AND negatively. Transphobia is unacceptable and harmful. That isn’t a debate.”

Elliot Page, the recently out trans star of Netflix’s The Umbrella Academy tweeted that he stands with Netflix’s employees who are trans, nonbinary, and people of color who are “fighting for more and better trans stories and a more inclusive workplace.”

I stand with the trans, nonbinary, and BIPOC employees at Netflix fighting for more and better trans stories and a more inclusive workplace #NetflixWalkout https://t.co/LU8FPSBdwE

Trans director Lilly Wachowski wrote via Twitter, “If you’re not standing up for trans lives, you need to take a good look at who you ARE standing with. Good luck today everybody!”

#NetflixWalkout If you're not standing up for trans lives, you need to take a good look at who you ARE standing with. Good luck today everybody! ⚡️🎸⚡️

Gay comedian Billy Eichner wrote, “Sending my love and full support to all trans employees and their allies participating in the #NetflixWalkout today.”

Sending my love and full support to all trans employees and their allies participating in the #NetflixWalkout today. ❤️✊ https://t.co/Mp7ubHuxeg

The media watchdog group GLAAD also said it stands with those employees who are “calling for accountability and change within Netflix and in the entertainment industry as a whole.”

Hours before the walkout, Netflix released a statement that said it respected the right of employees to demonstrate.

“We value our trans colleagues and allies, and understand the deep hurt that’s been caused,” Netflix said, according to Fox Business. “We respect the decision of any employee who chooses to walk out, and recognize we have much more work to do both within Netflix and in our content.”

Earlier this week, trans employees issued a list of demands to Netflix leadership. The list included developing a fund specifically aimed at funding and boosting trans and non-binary talent and content. They asked that the fund match the over $24.1 million that the company invested in Chappelle’s special and other transphobic content.

The demands also asked for revised internal processes for handling potentially transphobic content, an increase in trans and non-binary senior leadership in Netflix, allowing trans and non-binary employees to remove themselves from past videos and marketing materials related to the company’s LGBTQ diversity as well as an acknowledgment of the harm Netflix has caused with its transphobic content and the inclusion of disclaimers before such content, warning viewers of their anti-LGBTQ views.

In an email to employees on Tuesday, Netflix CEO Ted Sarandos apologized and slightly walked back his initial defense of Chapelle’s special.

“I have had time to reflect on our conversations over the last week and I wanted to make clear that I screwed up in how I have engaged with you — sending emails that lacked humanity and were overly simplistic about the real world impact of stories,” Sarandos wrote.

He added that he should have “first acknowledged the pain and harm that our trans colleagues experience” and that storytelling can have both positive and negative effects. His initial defense of the special said that Chapelle’s transphobia would never equate to real-world violence. However, some of Chappelle’s anti-trans tropes are regularly used to justify violence against trans women.

“I am deeply committed to more people seeing their lives being reflected on screen and to creating an even better workplace,” his email continued. “We’ve made progress and we have a lot more to do… Netflix is a learning company, and I will keep learning from the many conversations that I am having with colleagues across the company.”

How instant photography changed the stakes for LGBTQ people