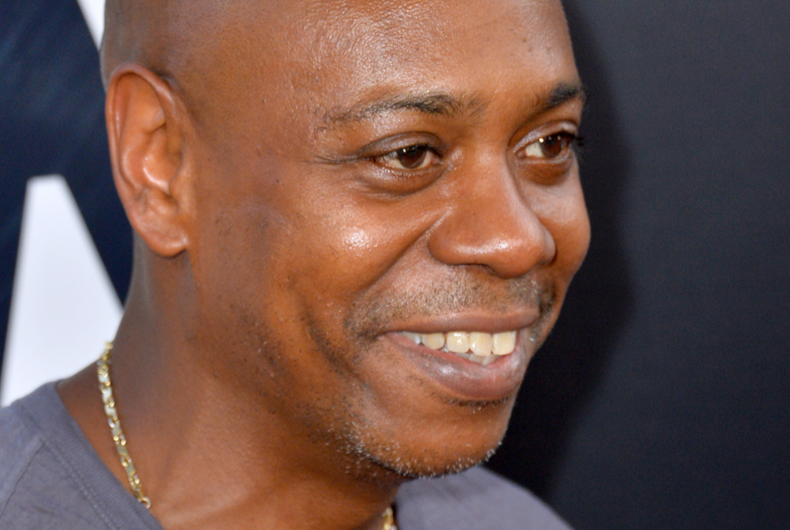 Netflix has been embroiled in controversy since releasing comedian Dave Chappelle’s last comedy special for the network. The stand up performance revolves around transgender people, accusing them of being “thin skinned” and not real women.

The company suspended three employees yesterday that they say crashed a meeting of company bigwigs and then CEO Ted Sarandos followed up with a shockingly blunt reason why the streaming service made the decision. Chappelle, he said, was too popular to ditch.

To cap off his numerous comedy specials, Chappelle pledged not to make jokes about the LGBTQ community any longer, offered to negotiate terms for rapper DaBaby, and announced he is a transgender exclusionary radical feminist (TERF) before launching into a derogatory diatribe about transgender women’s genitals.

TERFs have a long history of aligning themselves with the religious right when it comes to transgender people – trans women, in particular. They tend to support laws that exclude trans people from the proper bathroom and sex-segregated facilities and blatantly advocate against trans civil rights using language eerily reminiscent of the fringes of religious conservatives’ horror stories about LGBTQ people.

The collective of so-called “feminists” count Harry Potter author J.K. Rowling among them. Rowling has regularly amplified anti-trans talking points and insinuates that trans women are violent and dangerous.

After giving the audience an abbreviated and sanitized definition of what a TERF believes, Chappelle made sure his fans knew, “I’m team TERF!”

“Gender is a fact,” he continued. “Every human being in this room, every human being on Earth, had to pass through the legs of a woman to be on Earth. That is a fact. Now, I am not saying that to say trans women aren’t women, I am just saying that those pussies that they got… you know what I mean? I’m not saying it’s not pussy, but it’s Beyond Pussy or Impossible Pussy. It tastes like pussy, but that’s not quite what it is, is it? That’s not blood, that’s beet juice.”

Netflix employee Terra Field, a transgender woman, responded to the company’s decision to air the special on Twitter in a lengthy thread that also documented the dozens of transgender people violently killed so far this year alone.

Field and two others were suspended after they attended a quarterly meeting of the top 500 corporate executives where Sarandos was defending the company’s decision to go forward with the program.

“It is absolutely untrue to say that we have suspended any employees for tweeting about this show. Our employees are encouraged to disagree openly and we support their right to do so,” a Netflix spokesperson told Variety.

But Sarandos continued to try to spin the controversy, sending a follow-up memo to give managers talking points on how to field questions about the corporate decision.

“It never feels good when people are hurting, especially our colleagues, so I wanted to give you some additional context,” Sarandos wrote. “You should also be aware that some talent may join third parties in asking us to remove the show in the coming days, which we are not going to do.”

But then Sarandos gave the actual reason why the company was allowing their employees and customers to be hurt.

“Chappelle is one of the most popular stand-up comedians today, and we have a long standing deal with him. His last special Sticks & Stones, also controversial, is our most watched, stickiest, and most award-winning stand-up special to date,” Sarandos wrote.

That routine was also met with criticism for its blatantly transphobic jokes. The blowback to it was what launched most of the jokes and insults in this special.

I work at @netflix. Yesterday we launched another Chappelle special where he attacks the trans community, and the very validity of transness – all while trying to pit us against other marginalized groups. You're going to hear a lot of talk about "offense".

We are not offended 🧵

DC Comics reveals that its new Superman is bisexual