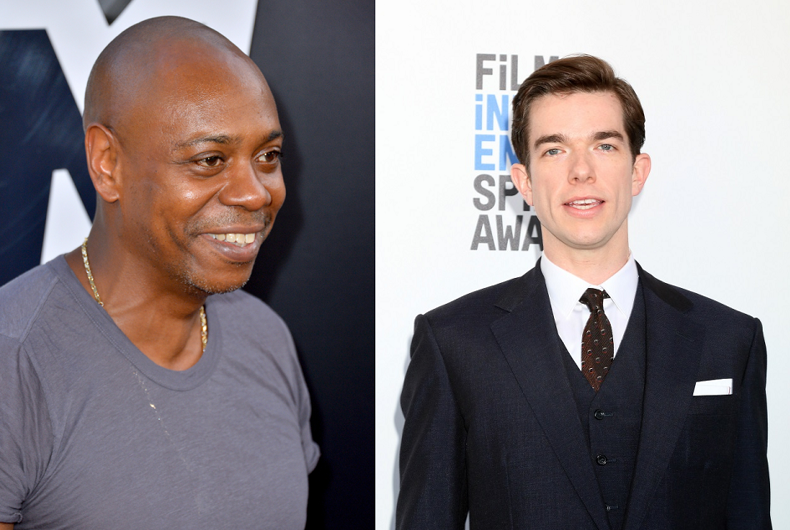 This past Friday, audiences in Ohio were taken aback during a performance of John Mulaney’s “From Scratch” tour. Comedian Dave Chappelle was a surprise opener for Mulaney, and according to audiences, he did stuck with his usual jokes about the LGBTQ community.

Specifically, Chappelle drew ire for ‘transphobic jokes’ according to attendees who took to Twitter to air their frustrations.

Related: Dave Chappelle attacked on stage & he immediately said the attacker was trans

The performance took place at Ohio State University’s Value City Arena in Columbus, Ohio. There is no footage of the event since attendees were asked to lock up their phones beforehand. That didn’t stop audience members from tweeting afterward. It is reported that after his set, Chappelle received a hug from Mulaney, which drew disappointment from LGBTQ people in the audience.

y’all ever hear ~12,000 people laugh at a transphobic joke, while you’re a trans person in the audience who didn’t know the transphobic comedian would make a surprise appearance at the John Mulaney show? yeah. wasn’t fun. fuck you D.C.

after the transphobic jokes he was loudly booed by a few people in the crowd but the majority of people cheered and laughed. there were a couple other offensive comments he made throughout his set that I don't fully remember, but feel free to share if you were there too.

This isn’t the first time Chappelle has drawn controversy for his anti-transgender jokes. He first drew controversy in 2019 for his Netflix special “Sticks and Stones” which featured anti-LGBTQ jokes. Since then, Chappelle has gone on to make anti-transgender jokes during his 2021 Netflix special “The Closer” and during a Netflix is a Joke event where he was tackled onstage for his anti-LGBTQ routine. After being attacked, Chappelle joked that the assailant was a trans man.

Chappelle has made jokes about trans women and jokes about supporting anti-gay comments made by rapper DaBaby and author J.K. Rowling’s anti-trans remarks. Chappelle has received criticism from groups such as GLAAD and the National Black Justice Coalition for his transphobic jokes.

The biggest surprise was that Chappelle was opening for Mulaney whose jokes tend to be focused on himself instead of targeting a community of people. Mulaney has primarily joked about his struggles with alcohol and addiction and has steered clear of any material about politics or social issues. There is still no word as to why Mulaney had Chappelle open for him on Friday.

Since Mulaney began trending on Twitter, other comedians have voiced that they don’t plan on having Chappelle as a surprise guest on their own shows.

I pledge no anti trans weirdo surprise guests on my summer tour.

dave chappelle wont be dropping in on my shows, if that’s what was stopping you from buying tickets.

And they’re not the first comedians to do so. Kathy Griffin has criticized Chappelle for his anti-LGBTQ jokes while comedians such as Patton Oswalt have since apologized for performing with the comedian. All critics of Chappelle who have since come forward have noted being LGBTQ allies and won’t continue working with Chappelle because of his comments.

Since the concert Friday, representatives for Dave Chappelle and John Mulaney have not reached out for comment.