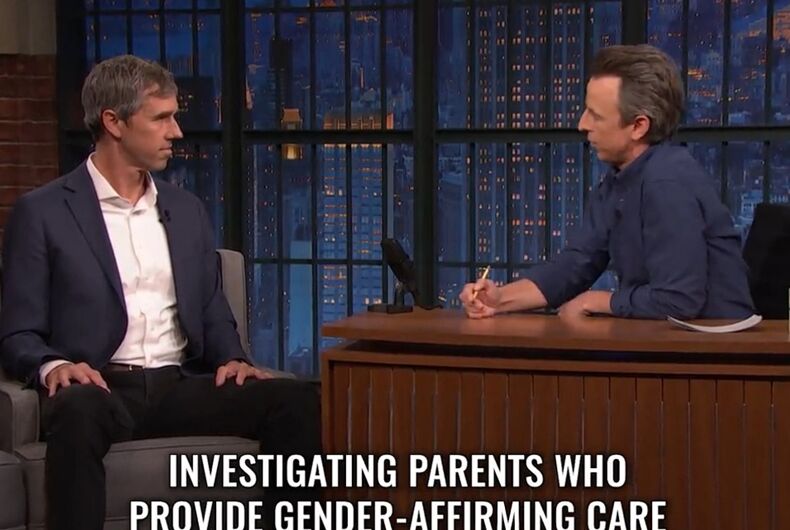 Texas gubernatorial candidate and former Rep. Beto O’Rourke talked about the importance of supportive parents to their transgender children on Late Night with Seth Meyers.

“These parents are the most loving parents you’ll find anywhere,” O’Rourke said. “They’re doing their best to help their kid navigate this incredibly difficult time in their lives.”

“They’re searching for answers, just loving the hell out of them, just trying to make sure that they’re ok, and our governor, Greg Abbott, is proposing charging them with child abuse, and if that charge is sustained, not only taking their trans kid from them, but every other child in the household, placing them in a foster care system in Texas that is the worst-run in the country, where 100 kids in that system died last year in the custody and the care of the state of Texas,” O’Rourke said.

His order was based on a bizarre, non-binding opinion from Texas Attorney General Ken Paxton (R) that said that allowing a trans minor to transition is unconstitutional.

Several county attorneys said that they wouldn’t uphold Abbott’s outrageous demand and a judge issued an injunction against it.

O’Rourke spent Mother’s Day with the Briggles, a family where one of the children is transgender.

“So I wanted to show up on Mother’s Day, cook a great meal, bring some flowers, have a beer, and just make sure that we shined a light on this loving family so that our fellow Texans understand what’s at stake,” he told Seth Meyers. “They might lose what I take for granted with Amy and our three kids.”

“I wanted to show up on Mother's Day, cook a great meal, bring some flowers, have a beer, and just make sure that we shined a light on this loving family so that our fellow Texans understand what's at stake.” – @BetoORourke pic.twitter.com/AewarCgIt2

Biden’s bold pledge on LGBTQ rights is being tested by Azerbaijan. What will he do?