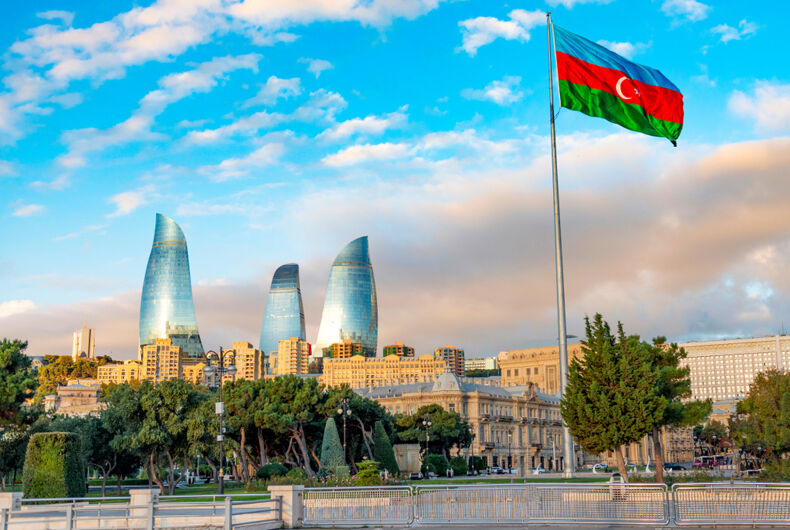 Just weeks after taking office, President Joe Biden released a historic memorandum that commits the United States to promote LGBTQ rights internationally. His timing signifies the priority of this shift to a values-based American foreign policy after four years of regression under Trump.

Words of this February 2021 pronouncement should be backed by deeds. Policies should have consequences. Where better to apply these principles than with the country ranked dead last on Europe’s Lesbian, Gay, Bisexual, Trans and Intersex Associaton’s (ILGA Europe) recent Rainbow Map ranking?

Related: The Pope says that God “doesn’t disown” LGBTQ people, but his Church certainly does

In Azerbaijan violent campaigns of arrest, torture, and extortion, especially of men presumed to be gay or bisexual and transgender women, are a grisly fact of daily life.

As if to underscore the point, two weeks after Biden’s directive, a 24-year-old Azerbaijani journalist and LGBTQ rights activist known as Avaz Hafizli (whose actual name was Avaz Shikhmammadov) was brutally murdered and his body dismembered by his cousin. Hafizli had staged protests demanding an end to discrimination against LGBTQ citizens. Last year, he chained himself to the fence outside the chief prosecutor’s office to protest official inaction against threats to the gay community.

Instead of abating, anti-LGBTQ activity in Azerbaijan has intensified in recent years. In March 2021, Minority Magazine reported a new movement called “Pure Blood,” which mobilized on Telegram to prey on LGBTQ people in Azerbaijan. The report found “a high level of homophobic and transphobic speech and hate crimes, as well as lack of response by authorities in addressing such incidents.” In June 2021 – Pride Month – more attacks against LGBTQ people were documented in the country.

Homophobic hostility is pervasive socially in Azerbaijan and actively promoted by the government. In 2019, President Ilham Aliyev reinforced anti-LGBTQ stigma in a speech to university students in which he derided the West, saying: “Where should we integrate? … With those who do not see the difference between men and women? … We will not integrate there at all.”

In August 2021, Tahir Karimli, the deputy chair of Azerbaijan’s parliamentary Human Rights Committee, said, “I unequivocally support the punishment of transgender people and the establishment of a moral police in this country.” This under the aegis of “human rights.”

Such oppression of the LGBTQ community does not tend to occur in exemplary democracies and genuine advocates for human rights rate Azerbaijan as a kleptocracy. President Aliyev, who seized power in 2003, has reportedly amassed a personal fortune up to $900 million, including a reported billion dollars’ worth of real estate in Britain.

Just days before Russia invaded Ukraine, Aliyev was in Moscow signing a wide-ranging agreement on diplomatic and military cooperation that he described as bringing “our relations to the level of an alliance.”

His ally Vladimir Putin has unleashed a vicious campaign of disinformation targeting LGBTQ Russians. That relentless propaganda has become such a core mission of Putin’s regime, and cunningly aims to appeal to fear and bigotry about the LGBTQ community.

In the wake of its invasion of Ukraine and atrocities against civilians, Russia’s government is an international pariah. But political repression of LGBTQ people and state sponsorship of anti-LGBTQ hate campaigns have increased worldwide, a phenomenon worsened in some cases by the COVID-19 pandemic.

In the face of this threat to human rights, the United States must be the great arsenal of decency. Many LGBTQ people throughout the world have a searing awareness that our lives, our safety, and our equality are a bellwether in the struggle for and protection of democracy.

Respecting the dignity of LGBTQ people is now a pillar of U.S. foreign policy. President Biden’s declaration is laudable and reflects the simple truth that foreign and domestic policy on human rights are inextricable. Safeguarding rights abroad means protecting them at home.

The “Memorandum on Advancing the Human Rights of Lesbian, Gay, Bisexual, Transgender, Queer, and Intersex Persons Around the World” promises to “combat the criminalization by foreign governments of LGBTQI+ status or conduct and expand efforts to combat discrimination, homophobia, transphobia, and intolerance on the basis of LGBTQI+ status or conduct.”

President Biden has the tools to combat intolerance and discrimination by foreign governments. He can begin by protecting LGBTQ people in Azerbaijan by implementing Section 907 of the U.S. Freedom Support Act, which limits American military aid to Azerbaijan. Successive U.S. administrations have erred by waiving this rule so that Azerbaijan can support the U.S. in countering “international terrorism.”

This willful looking away must end. It is time to enforce Section 907 – and make all countries that attack the LGBTQ community pay a price.

The severe economic sanctions now devastating Russia are punishment for its brutal, unprovoked attack on its peaceful neighbor, Ukraine. If crimes by the powerful against the innocent are to be called out and held accountable, then the U.S. must punish oppressive regimes with the leverage we have, not look away.

Challenge the benighted cowards in government who ruthlessly hound LGBTQ people. Start now in Azerbaijan, where officials perpetrate deadly hate in part because they believe they will pay no penalty.

Hans Johnson is president of East Area Progressive Democrats, the largest group of grassroots Democrats in California, and former board vice chair of the National LGBTQ Task Force. A native of Michigan, he lives in Los Angeles.